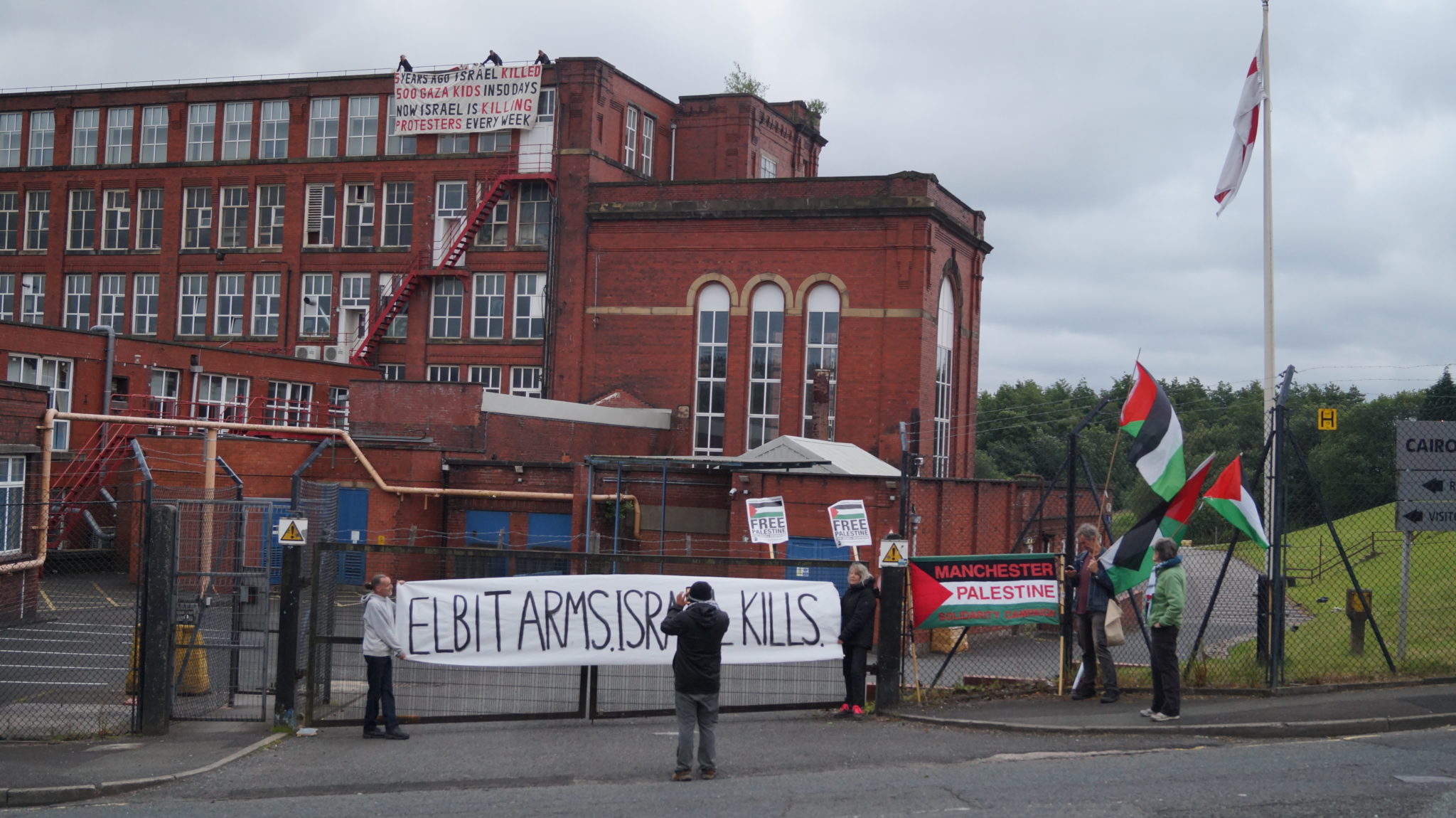 Editor’s Note: The following is a statement  from Manchester Action Palestine. Mondoweiss occasionally publishes press releases and statements from organizations in an effort to draw attention to overlooked issues.

Activists are today continuing their third day of a rooftop occupation of the Israeli arms company Elbit Ferranti in Oldham, having closed the factory for two days. They scaled the factory yesterday Monday 1st July at 5 a.m., beginning the protest at the time of the five-year anniversary of Israel’s 51-day bombing of Gaza in the summer of 2014. They dropped large banners off the front of the building stating “UK Stop Arming Israel” and others describing the killings in 2014 and the shooting of thousands of Palestinian protesters in the Great Return March this past year.

Campaigners are targeting the Elbit-owned factory as Elbit is the largest Israeli weapons producer. Elbit is best known for their unmanned aircraft systems (“UAS”) or drones, which include the military drones Hermes 900 and Hermes 450 which were employed extensively during the 51-day attack on Gaza in 2014. Elbit describe their drones as the “backbone” of Israel’s drone fleet. The protesters accuse the weapons giant of developing weaponry through their use on the Palestinian population, selling them as “battle-tested.”

Elbit Systems has four subsidiaries in the UK; UAV Engines, Instro Precision, Ferranti Technologies and Elite KL. All have faced protests and in recent years and the UAV Engines Factory in Shenstone was closed for nearly three days when it was similarly occupied in 2014.

Figures from the Campaign Against Arms Trade reveal that in 2017 the UK issued £221m worth of arms licenses to defense companies exporting to Israel. This made Israel the UK’s eighth largest market for UK arms companies, a huge increase on the previous year’s figure of £86m, itself a substantial rise on the £20m worth of arms licensed in 2015. In total, over the past five years, Israel has bought more than £350m worth of UK military hardware.

Elbit Systems also recently acquired Israeli Military Industries (IMI), which makes them the owner of the sole supplier of small-calibre ammunition to the Israeli army. Over the past year and a half, Israeli snipers have killed over 180 Palestinian protesters in the Great Return March in Gaza, including press, medics, disabled and 57 children. It was recently reported that during this period the UK approved £14m more in arms sales. The Israeli siege and bombing of Gaza has also continued during this time bringing about what the United Nations said would be an “unliveable” environment in Gaza by 2020.

“We think that arms companies like Elbit Ferranti should stop operating when it is clear their weapons are being developed through the mass murder of Palestinians in Gaza and the rest of Palestine,” Adie Mormech from Manchester Palestine Action said. “The crimes must stop and so must UK-based companies that are profiting from them. I was a teacher in Gaza for two years and I saw many children die in the hospitals from the kinds of weapons produced here during the ‘Pillar of Cloud’ attacks in 2012. One of my students was killed with her two young children in 2014 so I know a small part of the loss the Palestinians must be feeling. We’re trying to keep this factory shut so they can’t make things which kill innocent civilians. We demand a two-way arms Embargo between the UK and Israel so that no more death can be inflicted on the Palestinian people that the UK or Israeli government can profit from.”

“Today we want to highlight Elbit’s crimes against the Palestinian people, especially in Gaza where protesters are being shot with live ammunition every week,” Janet Hawkes from the International Solidarity Movement said. “We insist that the UK government, which is supposed to comply with human rights laws and international humanitarian law should urge Israel to stop killing people in Gaza and stop the occupation of all Palestinian land. I spent time in the West Bank last year and saw the violence that people have to live with every day. Elbit is Israel’s biggest arms company, and it profits directly from the continual surveillance, control and violent repression of the Palestinian people. We demand that it stops operating and that the UK cut ties with Elbit Ferranti. We don’t want this company on our doorstop.”

A network of people in Manchester taking creative action against Israeli apartheid through BDS and other effective, participatory Palestine solidarity work.