Home > News About Prisoners > “I Kept Three Copies of My Novels Lest They Get Confiscated”: An Interview with Freed Palestinian Prisoner Esmat Mansour

The message of Palestinian prisoners to the world is that they are political prisoners who seek freedom and that there is an Israeli demonization campaign against them. 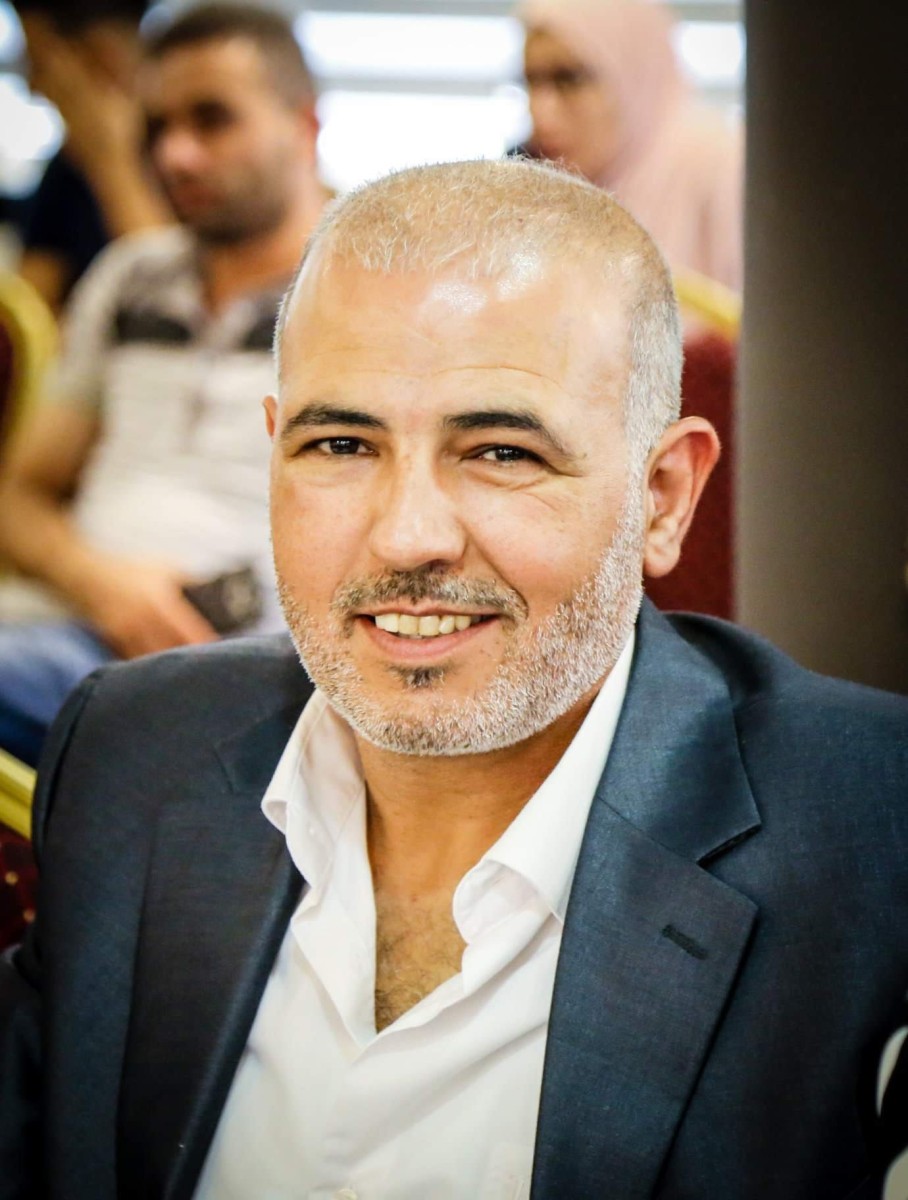 Q. Let’s start by getting to know you more closely. Could you introduce yourself and tell us about your life before you were arrested by Israeli forces in 1993? Why were you arrested?

My name is Esmat Mansour from Deir al-Jir village, east of Ramallah in the West Bank. I was imprisoned in 1993 before the Oslo Accords for participating in a military operation in which an Israeli settler was killed near Ramallah in the Beit El settlement, which is an illegal settlement established on the lands of Ramallah and Al-Bireh. At the time, I was a high school student, and I was 17 years old. I was sentenced to life, but because I was below the legal age, I was sentenced for 22 years, of which I spent 20 in Israeli prisons.

Of course, I was subjected to an Israeli interrogation that lasted sixty-three days in Al-Maskubiya Detention Centre in Jerusalem, in which all methods of torture were used against me. This is because I was part of a military operation, thus the act was viewed as dangerous because an Israeli settler was killed. We were young, 17 and 19 years old, which was an unprecedented experience for Israel. We were of non-partisan backgrounds and carried the attack individually. After that, I was moved between different prisons and served 20 years of imprisonment before being released in 2013 as part of talks between the Palestinian Authority and Israel to resume peace talks.

Q. You published three novels while in prison. What are these novels about? Can you talk to us about the literary and cultural scene in Israeli jails, including the contributions of Palestinian prisoners to prison literature?

I entered prison at a young age. Being imprisoned and having much time encourages prisoners, especially young ones, to learn more about culture and politics. The prisoners consider reading, writing, and culture as important tools in our struggle for liberation, because we carry and convey a message and struggle in the name of our Palestinian people. It is a sign and a guarantee for the continuity of our struggle.

Thus, Palestinian prisoners are engaged in culture. At the beginning of their hunger strikes and with the start of Israel’s military occupation of the Gaza Strip and the West Bank in 1967, the Israeli Prison Service (IPS) banned prisoners from having access to books and newspapers. The Israeli occupation prevented Palestinian political prisoners from even owning a piece of paper or pen. Palestinian prisoners were only allowed to have the three holy books. In addition to holy books, Israeli newspapers were allowed as well.

When Palestinian political prisoners started their first mass, open-ended hunger strike on February 18, 1969, their demand was to have access to paper and pens. We wanted books. We wanted to communicate with the world and know about culture, science, and the revolutionary experiences of others such as that of Ireland. As a result of the successful hunger strike of 1969, prisons filled with books. This meant that huge libraries came into existence over the years in prisons.

Even though the IPS has repeatedly prevented the entry of books, Palestinian political prisoners smuggled them through the International Committee of the Red Cross (ICRC): brochures, novels, plays, collections of poetry, books about the struggles of other peoples, political readings, translations, and analyses, all of which were handwritten. They were placed in pamphlets—what prisoners call the “cultural department” inside prisons.

Q. How were you introduced to writing novels?

When I entered prison, I was still in secondary school, so prisoners advised me to pay attention to education. Other prisoners introduced me to the library, and they told me that I should spend most of my time there. I started reading literature, novels, history, writings about the Palestinian cause and global revolutions. Through these readings, I began to develop my talent for writing. Given the fact that I was crammed behind walls and far from the world, there is an inner voice inside me that wanted to speak about my suffering and the suffering of those around me.

Q. How long were you placed in solitary confinement?

I spent two months straight in solitary confinement, but there were times when they moved me to the regular prison department for a week. This period gave me an idea of ​​isolation. I know political prisoners who spent from 7 to 15 years in solitary confinement. Our lives are joined and mixed, and we live our experiences almost collectively.

This novel was part of a competition to publish the works of prisoners, and was ranked first by the evaluation committee and published by the Palestinian Ministry of Culture. After that, I published a collection of short stories called A Closed Space. The collection talks about the barrier between prison and freedom, the moments when prisoners move outside the regular cells to meet their families, who ironically enter prison to see them. It is known that the family visitation rooms are located in an area inside the prison but are separate from the prison cells.

Prisoners’ cells are a few meters away. We get out of the prison cells and our families enter the prison walls. I call it the grey area in which you are freed from prison for moments and our families enter the prison. There are human and emotional scenes there, where families and prisoners are separated during the visits by a net or, later, glass barriers. These barriers still stand between a child and his father, a prisoner and his daughter, or a wife and her husband.

Q. Can you recall a scene that particularly struck you from these visits?

Watching a Palestinian mother age and lose her ability to see and hear over the more than 20 years she visited her son in prison. At the beginning of the visits, she would communicate with him directly through the prison window’s nets. After 20 years, she had aged, and was in her seventies or eighties, and her hearing and sight got weaker. The IPS replaced iron nets with glass barriers and installed landlines for prisoners to communicate with their families. The prisoner spent the whole visit trying to show his mother where the phone was, knocking on the glass barrier while she couldn’t see or hear him. It was a very sad moment. Even when she picked up the phone, she couldn’t hear anything. I engraved these scenes in my memory and later in short stories and literary texts.

I wrote these stories and spoke about my own experiences after what happened in Gaza in 2007, when Hamas took control of power, and the changing reality there. These are the three books that I published while in prison. When I was freed, I wrote a novel titled Al-Khazneh, the Arabic word for for a vault, treasury, or safe. The novel speaks of escape attempts from Israeli jails, aside from the recent one that took place at the Gilboa prison in September 2021. I used the term “Al-Khazneh”, because in Israel, they consider Gilboa prison a safe, yet six prisoners were able to break out even though it was a fortified safe—that is how I decided on the title of the book.

Q. How did you smuggle these writings out of Israeli prison?

Palestinian prisoners are pursued in every aspect. I personally used to write after 12 at night because only then the conditions were suitable for writing. There were ten and sometimes twelve or even eighteen prisoners in the same cell. One above me, another next to me, and I didn’t have enough personal space. It is not the perfect solitary situation that a writer needs.

So, I used to wait until the prisoners sleep at 12 and start writing until dawn, when prisoners would wake up to perform their prayers. I would go to bed then and give what I wrote to a prison mate, who would start copying my writings, and give them to another prison mate to make a third copy. We would make three copies and keep them in different places, because, if a copy gets confiscated, we’d have the other copies left.

We would follow the same strategy until the writing is over. The next challenge was how to send it out of Israeli prison. Smuggling writings was our only way out, because we can’t send these writings in the forms of letters, which get read and censored by the prison’s administration. We also could not send them with our families, so we had to smuggle them either with prisoners finishing their prison terms in capsules that they would swallow or hide in their bodies or clothes, with lawyers, or by some other means.

I personally smuggled my writings with prisoners who served their sentences. Sometimes, novels are ready to be published, but we have to wait for a long time to smuggle them out. The process may be delayed for months, waiting for a prisoner to be released. During this time, we could check the text and do some edits and notes. Other prisoners might also read and review the writings until we find a way to smuggle them.

Q. Did you personally participate in an escape attempt from Israeli jail?

I did not attempt to escape from Israeli jail. It seems that I do not have the courage or did not have the opportunity, but I see that every prisoner thinks of escaping. Every prisoner who has a chance to escape tries to. I was in the neighboring cell of prisoners who attempted to escape from Askalan (Ashkelon) Prison. I was in Section 1, Room 1, and an escape took place in Room 2, by Abdul Karim Hanani, who was released to Turkey alongside with other prisoners in 2011. I watched all the details and procedures that follow the escape attempt which is complicated.

In fact, it may sometimes take months to dig a centimeter, so prisoners need patience and above all to keep the process secret from both the administration and other prisoners. The prison administration keeps an eye on the level of sand and dirt in the sewage since the former is extracted from the ground and put in the toilets. Sometimes mistakes happen and the jailers are sharp or smart.

Once, an Israeli jailer noticed that when he does the morning count, prisoners in Room 2 would be awake and showered, because they would be digging throughout the night. So, he started to have doubts about why all the other rooms wake up when he knocks on the doors and the other prisoners’ hair is uncombed. This was the start of revealing the plot to escape.