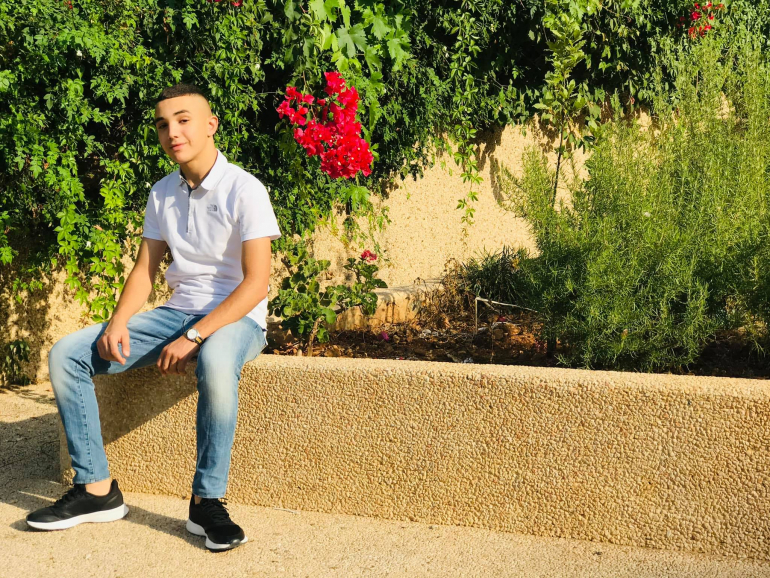 On 21 January 2021, the Israeli Occupation Forces re-arrested Palestinian child Amal Nakhleh, 17 years old, from his home in Ramallah during the early hours of dawn. Immediately after his arrest and upon the military prosecutor’s request, Ofer military court extended Amal’s detention for an additional 72 hours to issue an administrative detention order against him on 24 January 2021. Despite Amal’s young age and threatening health condition, Ofer military court confirmed the administrative detention order for the entire duration of six months. Military Judge Shamon Ashuel claimed that the secret information against Amal indicates a threat to the security of the region, hence justifying his arbitrary detention without charge.

Less than two months ago, on 10December 2020, the Israeli military court of appeal confirmedAmal’s releaseafter 40 days ofincarceration. The decision was based on Amal’s young age and physical and psychological health.During the appeal session, the military prosecutor insisted on extendingAmal’sdetention. As not only did they appeal Ofer military court’s previous decision to release him, they further requested an additional 72 hours to possibly issue an administrative detention order against Amal. The military court of appeal rejected both requests and ruled for Amal’s release.

According to Amal’s medical report, hesuffers from a rare disease called myasthenia gravis,[1]which requires special medical care including regular medication and constant monitoring of the symptoms to avoid possible health risks and complications. Also, Amal recently underwent surgery to remove a cancerous mass in his chest, and as a result, suffers from severe headaches and shortness of breath.It should be noted that Amal was previously arrested on 2 November 2020 from a random Israeli check-point between the two Palestinian towns of Atara and Birzeit, north of Ramallah. The Israeli Occupation Forces assaulted Amal, tied him, and severely beat him during thearrest. The military prosecutor presented Amal with a list of charges based on throwing stones, a common allegation against Palestinian children.

Increased Health Risk Amidst the Pandemic

Adding more concern to the imminent threat to the life of Amal Nakhleh, the Israeli occupation authoritieshave shown theirfailureto ensure the protection of Palestinian prisoners and detainees during the spread of COVID-19, as they continue to be subjected to harsh living conditions that do not align with the bare minimum of adequate living standards, further compounding the vulnerability of Palestinian prisoners and detainees. The overcrowding, insufficient ventilation, and lack of hygiene products make it nearly impossible to restrain the virus’s spread inside prisons and leave Palestinian prisoners unprotected and exposed to the rapid spread of COVID-19.

The UN human rights experts urged Israel to release the most vulnerable Palestinian prisoners and detainees, particularly women, children, older persons and those with pre-existing medical conditions, stating that: “Israel should be taking steps to release those facing arbitrary measures as well as vulnerable groups in its prisons to reduce overcrowding and ensure the minimum conditions to prevent the spread of the virus.”[2]

As the Occupying Power enforcing an apartheid regime, Israel systematically targets and arrests Palestinian children in an attempt to oppress and threaten a future Palestinian generation.In addition, it continues to place Palestinian childrenunder its arbitrary policy of administrative detention.Palestinian children are not afforded the protection they are entitled to under many international conventions and treaties, mainly the Convention on the Rights of the Child, which Israel ratified in October 1991. As of January 2021, the number of child prisoners reached around 170, including threeinadministrative detention.

Israeli military judicial procedures for Palestinian children still lack the proper protection entrenched under the Convention on the Rights of the Child. The Committee on the Rights of the Child in its concluding observations on the periodic report of Israel urged the State “to ensureeffective access to an independent judicial review of the legality of their arrest and detention within 24 hours of their arrest and are provided with adequate free and independent legal assistance”.[3]Further recommending that Israel amends its law relating to sentencing Palestinian children to 20 year in prison for throwing stones. The majority of children report being subjected to ill-treatment and having forced confessions extracted from them during interrogations. Forms of ill-treatment used by the Israeli soldiers during a child’s arrest and interrogation usually include slapping, beating, kicking and violent pushing. Palestinian children are also routinely verbally abused.

Additionally,Israeli Prison Services treat children the same way as adult prisoners without considering the specificity of their circumstances, placing them under inhuman detention conditions that do not meet the minimum standards of international guarantees of children’s rights. Palestinianchildren are held in rooms that lack proper ventilation and lighting, and fall victims to IPS medical neglect, as well as suffer fromashortage offood and clothing, isolation,and ill-treatment. Child prisoners are also punished with hefty fines, particularly children detained in Ofer prison,where fines against child prisoners in March and April 2019 amounted to ILS78,000, and more than ILS60,000 in May2019 alone.[4]

The detention of Palestinian children in harsh conditions in Israeli prisons and detention centres subjects them to different forms of psychological and physical torture, including policies of intimidation and severe punishments that prevent them from living and growing up in dignity and health.In addition, losing trust and protection and being pulled away from family disrupts the character formation process and alienates the children from their families and society.

Accordingly, Addameer Prisoner Support and Human Rights Association urgently calls upon immediate intervention to end the administrative detention of Amal Nakhleh and ensure his rights to liberty, health, and fair trial. To this end, we urge:

ii.            Israel, as the Occupying Power, to end the arbitrary detention of Palestinian children and ensure that their deprivation of liberty is used as the last resort for the shortest time possible, and guarantee that children are not being subject to any form of ill-treatment, provided with adequate living standards inside Israeli prisons and detention centres and have access to prompt medical care.