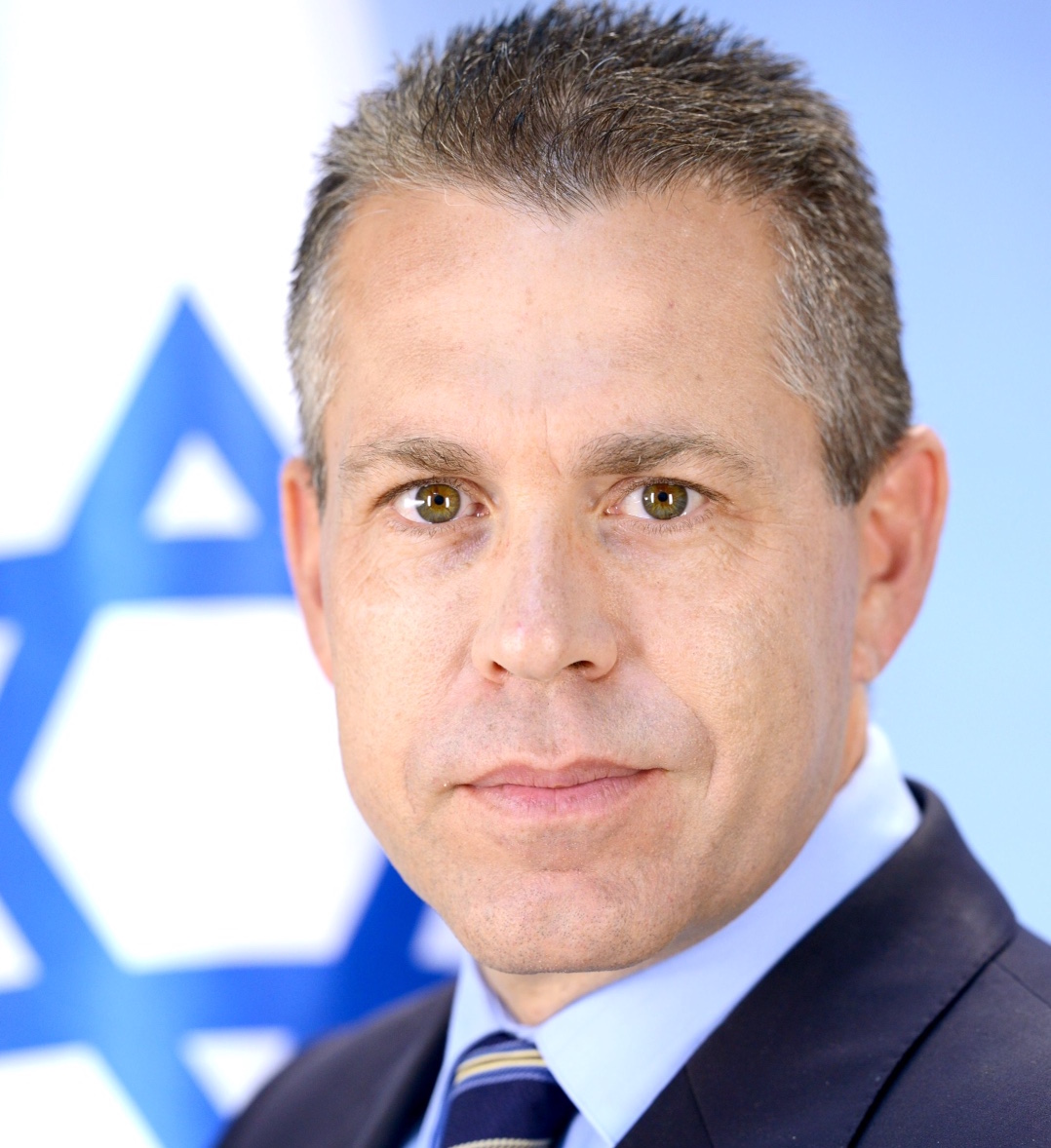 Last week, the news broke in Israeli media that Israel’s Ministry of Strategic Affairs (MSA) had launched a “stealthy campaign” that resulted in the shuttering of some 30 bank accounts affiliated with the Boycott, Divestment, and Sanctions (BDS) movement.

“For years, boycott promoters have disguised themselves as ‘human rights activists,’ managing to raise tens of millions of euros from Western countries and citizens who thought they were contributing to causes supporting justice and equality,” Strategic Affairs Minister Gilad Erdan said in a statement.

He went on to say that, over time, his ministry has “revealed that the supposed ‘human rights’ NGOs are in reality filled with anti-Semitic operatives with deep ties to terrorist groups fixated on destroying the State of Israel.”

According to the ministry, 10 US bank accounts and 20 European accounts were affected.

Israel Hayom reported that the Paypal, DonorBox, and Plaid accounts of the Samidoun Palestinian Prisoner Solidarity Network were affected “after it was divulged that Samidoun maintained close ties with the Popular Front for the Liberation of Palestine (PFLP),” a major left-wing political faction in Palestine.

But in a statement to Mondoweiss, Samidoun called the claims about their accounts “erroneous.”

“We do not and have never had a Plaid account. It is a mystery to us as to what account they believed they closed down or who was actually affected by this,” the group said, adding that in their opinion, smaller apps like DonorBox were “frightened by the bogus legal threat letters ” they received from zionist groups legal groups aligned with the Israeli state and the MSA.

The shutting down of their accounts on certain platforms like Paypal and DonorBox, the group says, do not actually “indicate any legal or political validity to the smears propagated by the MSA and its affiliated lawfare organizations.”

“It merely indicates that corporations like PayPal – who also provide services to illegal Israeli settlers in the occupied West Bank of Palestine while denying them to Palestinians under occupation – easily concede to these demands rather than upholding Palestinian human rights. This comes as no surprise,” the group said.

Highlighting the fact that it is Erdan who is “responsible for the Israeli prison system currently jailing over 5,200 Palestinian political prisoners,” he is more motivated to suppress groups like Samidoun who advocate for prisoners rights.

“The attacks on Samidoun and Palestinian human rights defenders are merely the latest attempt by the Israeli settler colonial state to shield itself from international accountability and enjoy immunity for war crimes and crimes against humanity,” the group said. “Those concerned about perpetrators of terror wearing suits can look directly at Tel Aviv and Washington, DC in the highest offices of government  to find those who best fit that description.”

Israel Hayom reporting claims by the ministry, also added that the credit-card accounts of Ramallah-based human rights NGO, Al-Haq, were also closed due to the group’s director’s affiliation with PFLP, and several stints in Israeli prison. Al-Haq’s director, Mr. Shawan Jabarin, like thousands of other Palestinians, was imprisoned by Israel for several years without charge or trial.

Despite the ministry’s claims of success against Al-Haq and other organizations, Al-Haq pushed back, saying that their organization does not actually hold credit card accounts, “and therefore despite the sweeping claims articulated by the MSA, there was never an account open, that could be closed to begin with.”

The group slammed Erdan’s smear campaign against Palestinian rights groups as “spurious, unsubstantiated and libellous,” constituting what it called an “illegal interference” with Palestinian civil society under Article 43 of the Hague Regulations, which require Israel as an occupying power to “not interfere with the civil life of the occupied territory unless absolutely necessary for military or humanitarian reasons.”

“The Israeli MSA report provides no credible proof that the accounts closed had any links to terrorism,” Al-Haq said. “The report is but the latest offensive in the Israeli government’s undisclosed economic and propaganda campaign aimed at attacking and silencing peaceful Palestinian organisations.”

“…The report is premised on racist caricatures, attempting to paint Palestinian civil society organisations as essentially suspicious and violent, in order to discredit and defund them. Beyond being published by the MSA itself, the report notably has no date and no named author, does not cite credible sources, and does not withstand academic scrutiny.

On 23 January 2019, and in response to another MSA report, the office of the European Union (EU) in Israel stated that the report contained allegations that are “unfounded and unacceptable.” This served to reiterate the EU’s previous response flatly denying similar allegations that the EU was funding terrorism.”

The group went on to reiterate its rejection of any forms of racism and anti-Semitism, and that, despite the ministry’s attacks on the organization, Al-Haq’s funding has remained unaffected.

Erdan posted a screenshot of Al-Haq’s statement on Twitter, saying “The days of you masquerading as ‘human rights activists’, raising money for your hateful boycott, while promoting anti-Semitism and terror, are over.” 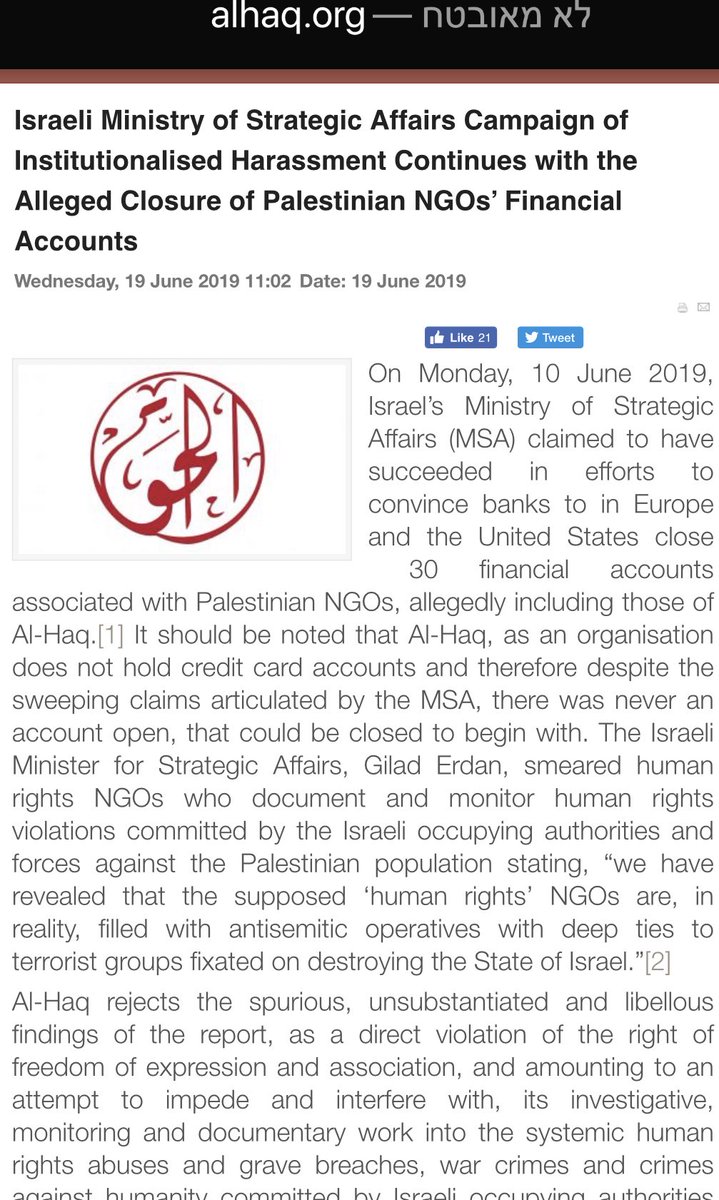 Dear BDS: We will continue to reveal to the world that you truly are “terrorists in suits”.
The days of you masquerading as “human rights activists”, raising money for your hateful boycott, while promoting anti-Semitism and terror, are over

The Israel and Palestine Director of Human Rights Watch Omar Shakir took to Twitter to defend Al-Haq, and called Erdan a “demagogue in a suit.”

This attack by a senior minister on an award-winning Palestinian rights group attests to Israeli govt’s assault on those who challenge its rights abuses of Palestinians. @alhaq_org represents the best of the human rights movement; @giladerdan1 meanwhile is a “demagogue in a suit” https://twitter.com/giladerdan1/status/1141617562091999232 …

Dear BDS: We will continue to reveal to the world that you truly are “terrorists in suits”.
The days of you masquerading as “human rights activists”, raising money for your hateful boycott, while promoting anti-Semitism and terror, are over

158 people are talking about this

This article has been corrected to reflect the statements of Samidoun.

Other posts by Yumna Patel.