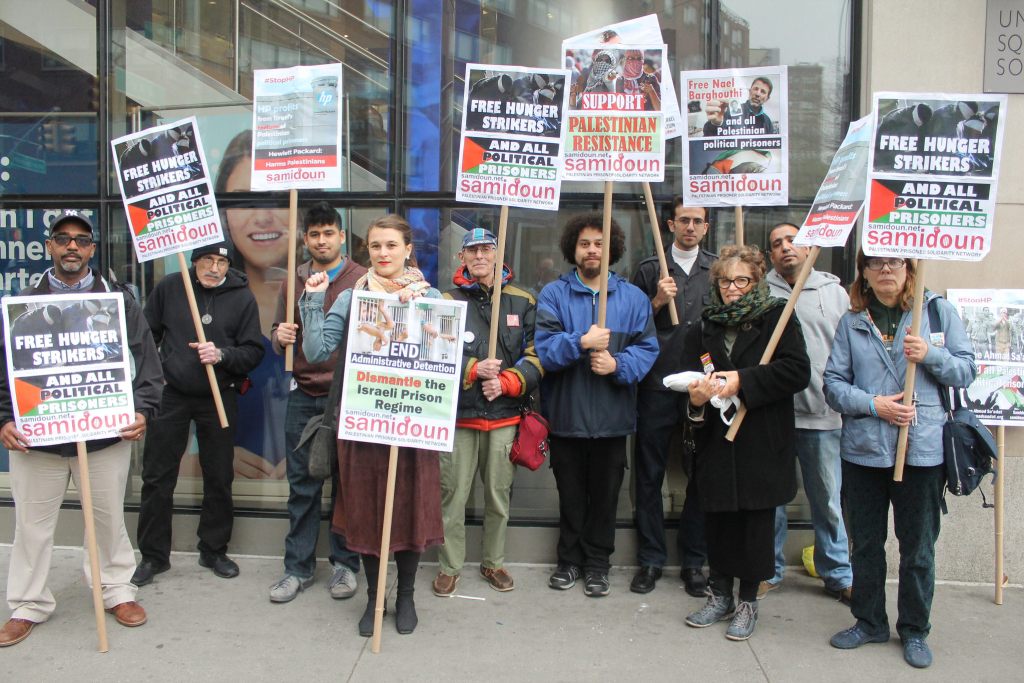 At least three Palestinian prisoners are currently on hunger strike in Israeli prison. On Wednesday, 8 November, Israeli occupation forces stormed the home of Bajis Nakhleh in the Jalazone refugee camp in Ramallah in a pre-dawn raid; he was taken to the Etzion interrogation center, where he immediately launched an open hunger strike. A former prisoner, Nakhleh, 53, spent over 20 years in Israeli prisons over various arrests and was released only two months prior, on 1 September. Nakhleh is now on his fourth day of hunger strike.

Hamza Marwan Bouzia, 27, from Kifl Hares in Salfit, is also on hunger strike for 26 days. He has served over seven years in Israeli prison in the past and is now held without charge or trial under administrative detention, and is demanding his freedom.

In particular, Bouzia and Shokeh have been on hunger strike for an extended period of time, in which they not only are suffering from extensive weight loss, fatigue and pain but also cognitive difficulties. Prior to and after the third week of hunger strike is one of the most dangerous times for a person on strike. The commitment of the hunger strikers to achieve their freedom is so great – and the ability to challenge administrative detention so limited by the occupation – that their bodies and lives are on the line in their bid for freedom.

On Thursday, 9 November, the family of Bilal Diab announced that he was suspending his hunger strike after 23 days. Diab, 32, suspended his strike after an agreement signed by the representetive of Islamic Jihad prisoners in Megiddo prison with the Israeli intelligence representative, Wattan TV reported. His administrative detention will not be extended and he will be released on 18 January 2018. He has been imprisoned without charge or trial since he was seized by Israeli occupation forces on 14 July 2017.

Diab previously launched a 78-day hunger strike in 2012 to win his freedom from administrative detention, imprisonment without charge or trial. The agreement came shortly following a hearing on Thursday morning by the Israeli high court, from which Diab was excluded due to his severely deteriorated health.

Samidoun Palestinian Prisoner Solidarity Network urges support and action to free these three Palestinians whose lives and bodies are on the line for freedom and against injustice.  By taking action, you can show the Israeli occupation and international governments that these Palestinians are not alone and have worldwide support and solidarity with their urgent demands.

1) Organize or join an event in support of the hunger strikers. Protest outside your local Israeli embassy, consulate or mission, or at a public square or government building. You can drop a banner or put up a table to support the prisoners and their strike. You can also bring signs and flyers about the hunger strikers to local events about Palestine and social justice. Send your events and actions to us at samidoun@samidoun.net or on Facebook.

Tell your government: Three Palestinian prisoners are on hunger strike for their basic human rights – for freedom from imprisonment without charge or trial. Governments must pressure Israel to end administrative detention now!

3) Build the Boycott, Divestment and Sanctions Campaign! Join the BDS Movement to highlight the complicity of corporations like Hewlett-Packard and the continuing involvement of G4S in Israeli policing and prisons. Build a campaign to boycott Israeli goods, impose a military embargo on Israel, or organize around the academic and cultural boycott of Israel.