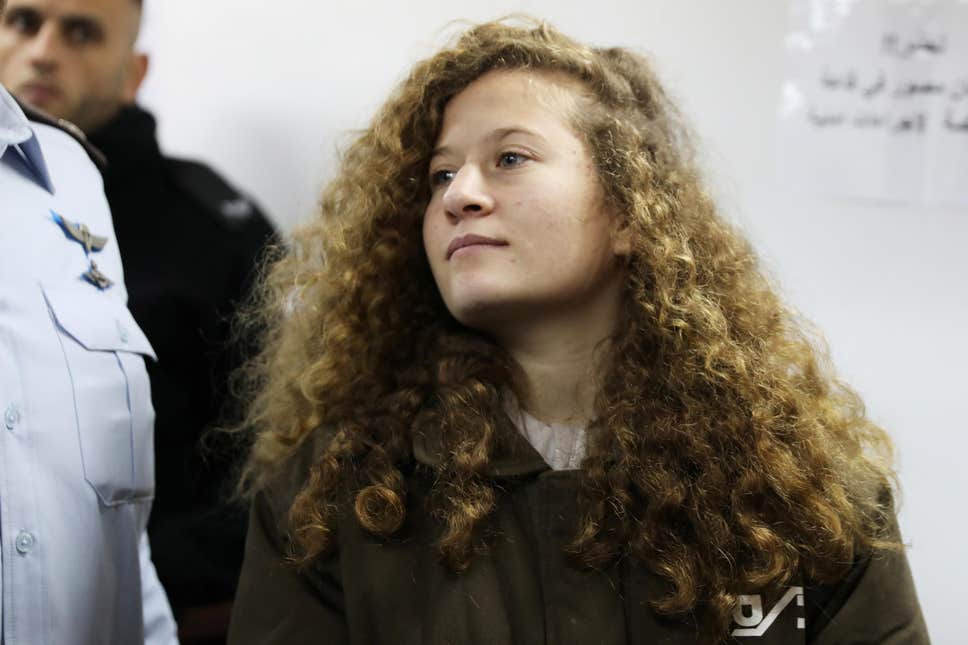 Ms Tamimi, 17, became a symbol of resistance in the occupied West Bank after she was filmed slapping soldiers at the entrance to her home in the village of Nabi Saleh. She was just 16 at the time and was subsequently sentenced to eight months in jail, as part of a plea deal where she admitted to aggravated assault of the solider and incitement.

The Palestinian teenager was eventually released last July, to jubilant crowds of protesters. Last month she travelled to London to study languages, her family told The Independent.

Organisers of “National Demonstration for Palestine” and her family said that she will join MPs including Diane Abbott, Richard Burgon and Lloyd Russell-Moyle in Saturday’s march, which will start at Portland Place at noon.

It has been timed to coincide with Nakba or “Catastrophe” Day, which is observed by Palestinians on 15 May each year and commemorates when hundreds of thousands of Palestinians were forced to leave or fled from their homes during the conflict which surrounded the creation of Israel.

The protest’s organisers, which include the Palestine Solidarity Campaign, Stop the War Coalition and Muslim Association of Britain, are protesting against what they called “unprecedented attacks” on the Palestinian people by Israel “in alliance with US President Donald Trump”.

They are also rallying again Israel’s ongoing violations of international law, including maintenance of illegal settlements in the West Bank.

Israel has repeatedly refuted allegations it attacks Palestinians and recognises settlement building as legal under its own laws.

Ms Tamimi’s father Bassem, whose eldest son Wa’ad, 21, is currently in an Israeli jail, told The Independent that his daughter would be joining the marches as Palestinians were suffering from “the peak of oppression” at the moment.

“Yes, she will be joining, it is about helping Palestinian solitary which is important,” he said from his home.

“At the moment it is the peak of oppression here. Every day there are raids on the village, access is closed to areas, [Israeli forces] shoot rubber bullets, tear gas. It is happening a lot at the moment,” he said.

He said the family were still facing a fierce crackdown.

“My oldest son is serving a 14-month jail sentence for allegedly throwing stones. Ahed’s other brother Mohamed was arrested two weeks ago, and her cousin Mohamed was also arrested. Both are 15 years old. They were only released on bail,” he added.

Israel has denied any crackdown and maintained its soldiers show restraint.

Tensions have reached breaking point in Israel and the Palestinian Territories over the last few months, with armed confrontations that have nearly hurtled into war.

Troubled flared last year when Mr Trump recognised the contested city of Jerusalem as Israel’s capital and then cancelled all funds to the United Nation’s Palestinian refugee agency.

There was further anger among Palestinians who now live in Israel, because of the Israeli parliament’s decision to push through the controversial nation state law – which defines Israel as the homeland for Jewish people. The constitution-like legislation also downgraded Arabic from an official state language to one of special status and endorsed the creation of Jewish-only settlements.

During the lead up to elections in April Mr Netanyahu, who was later re-elected for a record fifth term in office, promised to annex the West Bank, which is illegal under international law.

Against this has been a steady cycle of violence along the border fences between Israel and Gaza. In the last year Israel has killed over 250 Palestinians in protests and clashes along the border.

Israel, which has been accused by the UN of committing war crimes for targeting civilians, medics and journalists there, has defended the actions of its security forces, saying the protesters have fired incendiary kites and explosives into Israel, endangering civilians.

But this has ignited cross-border exchanges of fire between militants in Gaza and the Israeli army.

Many of these issues are the focus of Saturday’s protest, organisers said.

Ben Jamal, director of Palestine Solidarity Campaign, said: “As Israel continues to flout international law and violate human rights, there is a responsibility on the global community to hold it to account and push for an end to the oppression of the Palestinian people.”

He added: “In the week when Palestinians commemorate their dispossession in 1948, we are marching to send a clear message that we stand in solidarity with them, and to call again on the UK government to end its complicity with Israel’s illegitimate control of Palestinian lives.”