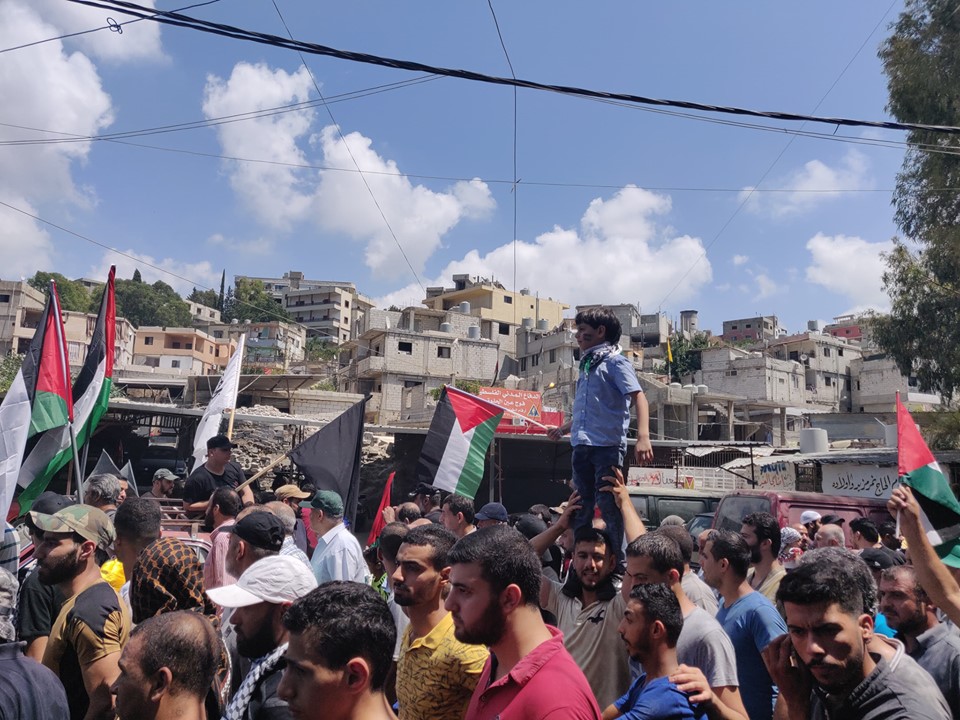 Al-Awda, the Palestine Right to Return Coalition, stands unified with our people, Palestinian refugees in Lebanon engaged in ongoing protests and strikes for their human, social and civil rights. As Palestinian refugees struggle for their right to return denied to them for over 71 years, they also face discrimination, exclusion and marginalization in their countries of refuge. This is particularly true in Lebanon, home to over 500,000 Palestinian refugees just over the border from their homeland, Palestine, where they have long confronted conditions of siege and exclusion.

Palestinian refugees in Lebanon are denied access to over 70 regulated professions, including medicine, public transit, fishery and farming. They cannot buy property and poverty and deprivation in the Palestinian refugee camps has become severe, forcing many Palestinian youth once again into exile to seek safety and a livelihood in Europe and elsewhere. Most recently, protests, mostly led by Palestinian youth, have erupted in an “uprising of the camps” across the country following orders for the implementation of a new Lebanese labor law announced by Minister Kamil Abu Sleiman.

Abu Sleiman, who ordered authorities to raid and shut down shops and factories to prevent the employment of “illegal foreign workers,” represents the right-wing Lebanese Forces party, well-known for its incitement against Palestinian and Syrian refugees in Lebanon. The history of the Lebanese Forces is as a far-right militia led by warlords, most notoriously Samir Geagea. The Lebanese Forces militia and allied forces have a long history of committing genocide against the Palestinians as well as massacres against communities allied with the Lebanese national-liberation movement and did so historically while receiving training and armaments from the Zionists.

Therefore, it comes as no surprise that Abu Sleiman’s announced labor law enforcement would require “foreign workers” to obtain costly, bureaucratic work permits as well as requiring payments into Lebanon’s Social Security system – from which these workers can and do not benefit, as Palestinian refugees areexcluded from Lebanese education and healthcare, instead relying on services provided by UNRWA. These policies also mean that Palestinian small businesses may be forced into closure, while Palestinian workers are further excluded from the jobs, often low-paying, that they are able to obtain.

It should be noted that the targeting of “illegal foreign workers” also aims to exclude Syrian refugees. The struggles of Palestinian and Syrian refugees for basic social and economic rights in Lebanon come when these refugees are under attack on multiple levels, including and especially by the racist and indeed deadly policies of the U.S. and European Union, from attempt to alter Palestinian refugees’ clear status in international law to the imposition of “Fortress Europe” leading to the deaths of thousands in the Mediterranean Sea.

Palestinian refugees are struggling for their right to return home and for the liberation of Palestine. The fundamental cause of their deprivation is the Israeli settler-colonial project and the Zionist occupation of Palestine, dispossessing them from their ancestral homes and lands. For decades, the refugee camps in Lebanon were known as the heart of the Palestinian revolution. However, the decades following the signing of the Oslo agreements in 1993 have been particularly devastating to these Palestinians, as their right to return and even their existence and livelihood in the camps has been marginalized and forgotten, even by the official Palestinian leadership.

Today, the attack on the right of return is mounting. UNRWA is facing defunding, a campaign led by the United States as part of Trump’s so-called “deal of the century” project and designed to even further marginalize Palestinian refugees and push them into deprivation and despair. From Oslo until today’s schemes for “economic peace” and normalization, the further dispossession of Palestinian refugees is central to every new attack on Palestine. This attempt to further impoverish Palestinian refugees in Lebanon cannot be separated from the broader attack on the fundamental rights of the Palestinian people everywhere they live.

In the same way, from these strikes and protests in the camps across Lebanon to the Great March of Return in Gaza to movements throughout the diaspora, Palestinian refugees have made it clear that their right to return to their homes and lands throughout occupied Palestine cannot and will not be denied.

Palestinian youth organizations have expressed a number of demands and pledged to continue their protests until they are met, including:

They concluded their statement with a call to action and a statement of principle, one that we as Al-Awda reaffirm today: “We call upon our people in occupied Palestine and in the Arab nations and in Europe and the United States and across the globe to support us in our demands by organizing events and mobilizations. We as a Palestinian people reaffirm our right to return to Palestine, all of Palestine, and reject resettlement and all conspiracies aiming to eliminating our Palestinian cause.”

We urge people to take action to support the Palestinian refugees in Lebanon in their protests. Actions that you can take include:

Please add your name and that of your organization to this statement! It will be delivered to the Lebanese Consulate in Los Angeles at the protest there.