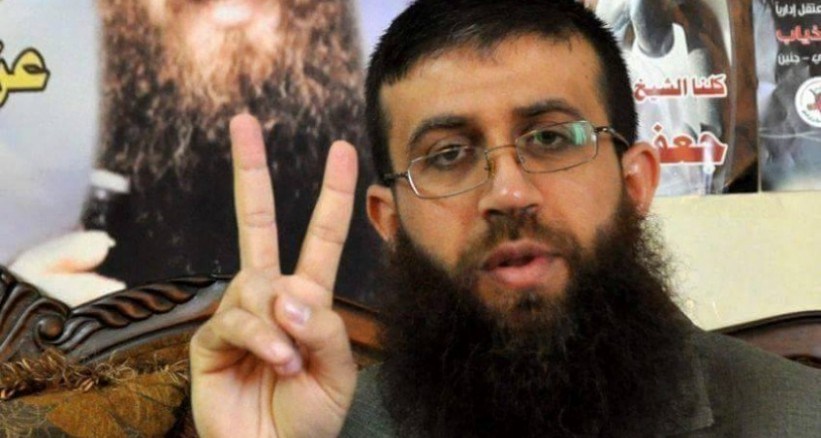 Prominent Palestinian leader, organizer and former prisoner and hunger-striker Khader Adnan was seized on Monday morning, 11 December, by Israeli occupation forces at his home in Arraba, Jenin. He immediately launched an open hunger strike to demand his release.

Randa Moussa, his wife, told Palestine Today that he had announced an immediate strike on food, drink and speech after his arrest. She said that four patrols, an armored troop carrier and a jeep surrounded their home at 2:30 am and invaded the home violently, trying to break down the door of the home, and that they hit Adnan on the back and hand, throwing him on the ground before handcuffing him. He was then interrogated in a closed room of the house before being taken away to an undisclosed location.

Adnan, prominent political activist from the town of Arraba near Jenin, has been arrested 10 times and spent six years in Israeli prison, all in administrative detention – imprisonment without charge or trial. In 2012 and 2015, he carried out 66-day and 56-day hunger strikes, respectively, winning his liberation from arbitrary Israeli imprisonment.

The Islamic Jihad movement said in a statement that “the arrest of leaders and popular and national symbols will not weaken our people or break their will….this is a desperate attempt to suppress the uprising of Jerusalem,” as Palestinians inside and outside Palestine have risen up against US President Donald Trump’s declaration that Jerusalem is the “capital of Israel” in the eyes of the US.

Khader Adnan is a Palestinian and international symbol of steadfastness within the prisons who has inspired widespread international solidarity. Samidoun Palestinian Prisoner Solidarity Network demands the immediate release of Khader Adnan and will announce further actions as we receive more news and information from Palestine on Adnan’s detention. The struggle for the freedom of Palestinian political prisoners is at the forefront of the struggle to defend Jerusalem and liberate Palestine.