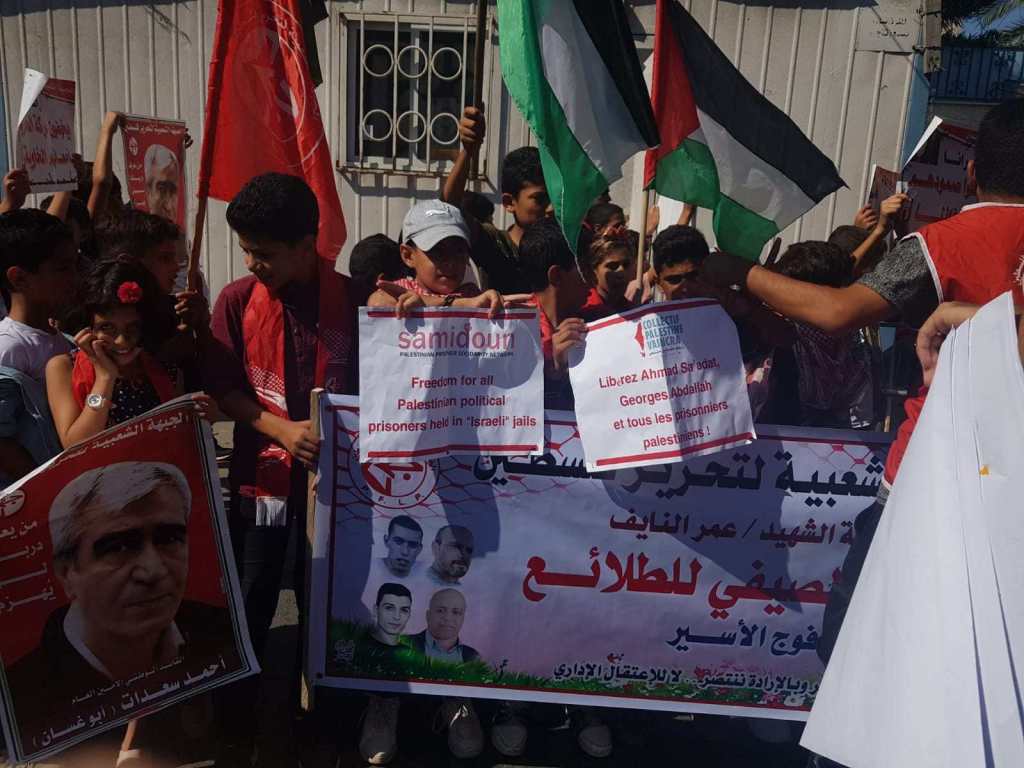 On Wednesday evening, 21 August, the Prison Branch of the Popular Front for the Liberation of Palestine announced that a number of Palestinian prisoners were launching a solidarity strike with Huzaifa Halabiya and his fellow hunger strikers on Thursday, 22 August. Halabiya, from Abu Dis in Jerusalem, has been on hunger strike for 53 days against his imprisonment without charge or trial under Israeli administrative detention. There are eight prisoners currently on hunger strike and almost 50 more have already joined solidarity strikes inside Israeli prisons.

Dozens of prisoners announced that they would join a three-day solidarity strike beginning on Thursday, including the following:

As they launched their strike, protests were planned throughout occupied Palestine, including a protest in Gaza City at the office of the High Commissioner for Human Rights at 10 am and a protest outside Ofer prison. Participants in the Gaza protest carried signs and banners demanding freedom for all Palestinian prisoners in Israeli jails, while children performed street theater in support of the prisoners.

In Eizariya and Abu Dis in Jerusalem, both towns observed a general commercial strike in support of Halabiya and Ismail Ali, both from Abu Dis. Ali has been on hunger strike for 30 days against administrative detention. National forces and political parties called for a day of anger and demonstrations to confront the occupation. The general strike followed an evening protest on Wednesday, which launched from the sit-in tent in support of the prisoners in Abu Dis to the homes of the martyrs Nasim Abu Roumi and the wounded Mohammed al-Sheikh in Eizariya. Hundreds joined the march to support the prisoners and demand justice for the wounded and the martyrs, while occupation forces fired tear gas, sound grenades and rubber-coated metal bullets toward the youth in the demonstration.

Halabiya is facing a particularly precarious health condition. He is a leukemia survivor who also suffered burns over the majority of his body as a child. He has been jailed without charge or trial since June 2018. When he was seized from his home by Israeli occupation forces, his wife was pregnant; he is now the father of seven-month-old Majdal, who he has been denied the opportunity to even meet.

Samidoun Palestinian Prisoner Solidarity Network urges all supporters and friends of Palestine everywhere around the world to stand with these courageous prisoners who have put their lives on the line to seek freedom and an end to the unjust system of administrative detention. International solidarity can play an important role in supporting their struggle, and Palestinian prisoners are calling for our actions. All of our participation, protests and petitions can play a role in helping them to seize victory for justice and freedom.

1) Organize or join an event or protest for the Palestinian prisoners. You can organize an info table, rally, solidarity hunger strike, protest or action to support the prisoners. If you are already holding an event about Palestine or social justice, include solidarity with the prisoners as part of your action. Send your events and reports to samidoun@samidoun.net.

3) Boycott, Divest and Sanction. Join the BDS campaign to highlight the complicity of corporations like Hewlett-Packard and the continuing involvement of G4S in Israeli policing and prisons. Build a campaign to boycott Israeli goods, impose a military embargo on Israel, or organize around the academic and cultural boycott of Israel. Learn more about the BDS campaign at bdsmovement.net.