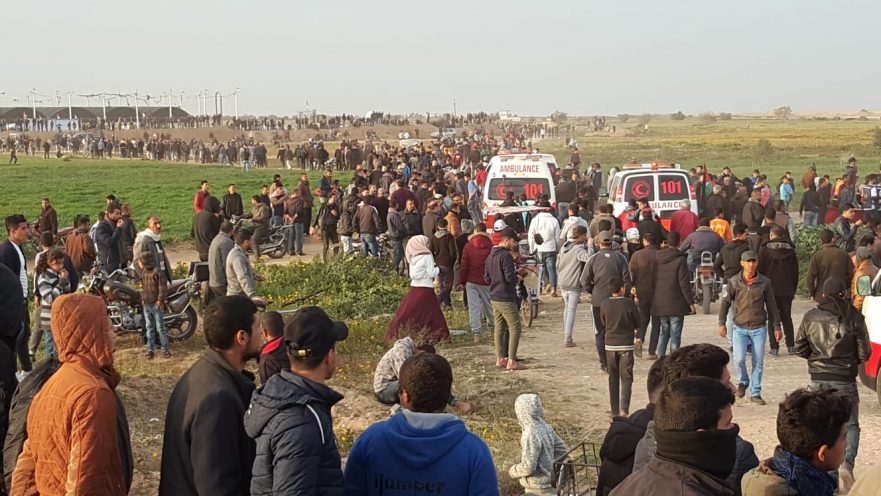 As Gaza’s Great March of Return continued for the 45th consecutive Friday, its leaders called for supporters around the world to take action on Saturday, March 30, Palestinian Land Dayand the one-year anniversary of the ongoing mobilization.

Their appeal came after fire by Israeli forces wounded 98 unarmed Palestinians, including 15 children, two medics and a journalist.

Seven injuries were reported as serious, including a 17-year-old girl shot in the chest with a bullet, the Gaza-based Palestinian Center for Human Rights reported.

After the demonstration, the Supreme National Commission for the Great March of Return and Breaking the Siege released its statement, which Gaza activist Ayman Anwar translated into English and posted on Facebook.

“The Commission appeals to the solidarity movements, civil society organizations, all the free people of the world and those who believe in human rights to declare Saturday, March 30, the forty-third anniversary of the Land Day, the first anniversary of the start of the return marches ‘a universal day of solidarity with the demands of our people to break the siege, return and freedom,’” the statement said.

The Commission called for “the implementation of various solidarity events, especially demonstrations and festivals in capitals and major cities in all countries of the world to demand the breaking of the illegal and immoral siege of Gaza Strip, and to emphasize the right of our people to freedom and return to their homes from which they were forcibly displaced in 1948, as well as to reject the so-called deal of the century.”

Elsewhere in its statement, the Commission hailed Palestinian prisoners, the focus of the day’s march after a wave of repression, including violent assaults, in Israeli prisons.

“Your suffering is our suffering, and the practices of the Zionist enemy against you are an indivisible part of its practices against Gaza and every part of Palestine, and we will continue our struggle in all forms to liberate all of you,” it said.

Over the first nine months of the Great March of Return, Israeli forces killed 254 Palestinians in the Gaza Strip, including 180 participants in the March, according to data collected by the United Nations Office for the Coordination of Humanitarian Affairs.

During the same reporting period between March 30 and December 31, 2018, Israeli troops inflicted 23,603 injuries, all but 219 of them against the March.

As casualties have mounted, the necessary medical response “remains challenging due to the lack of funds, years of blockade, the internal divide and a chronic energy crisis,” OCHA said.

🆕 #Humanitarian snapshot: casualties in the context of demonstrations and hostilities in #Gaza (30 March – 31 December 2018): https://t.co/BhSqv90fcI pic.twitter.com/cFOV49nOSg

Featured image: Israeli forces wounded 98 civilians on the 45th Friday of the Great March of Return in the eastern Gaza Strip. (Photo by the Palestinian Center for Human Rights)