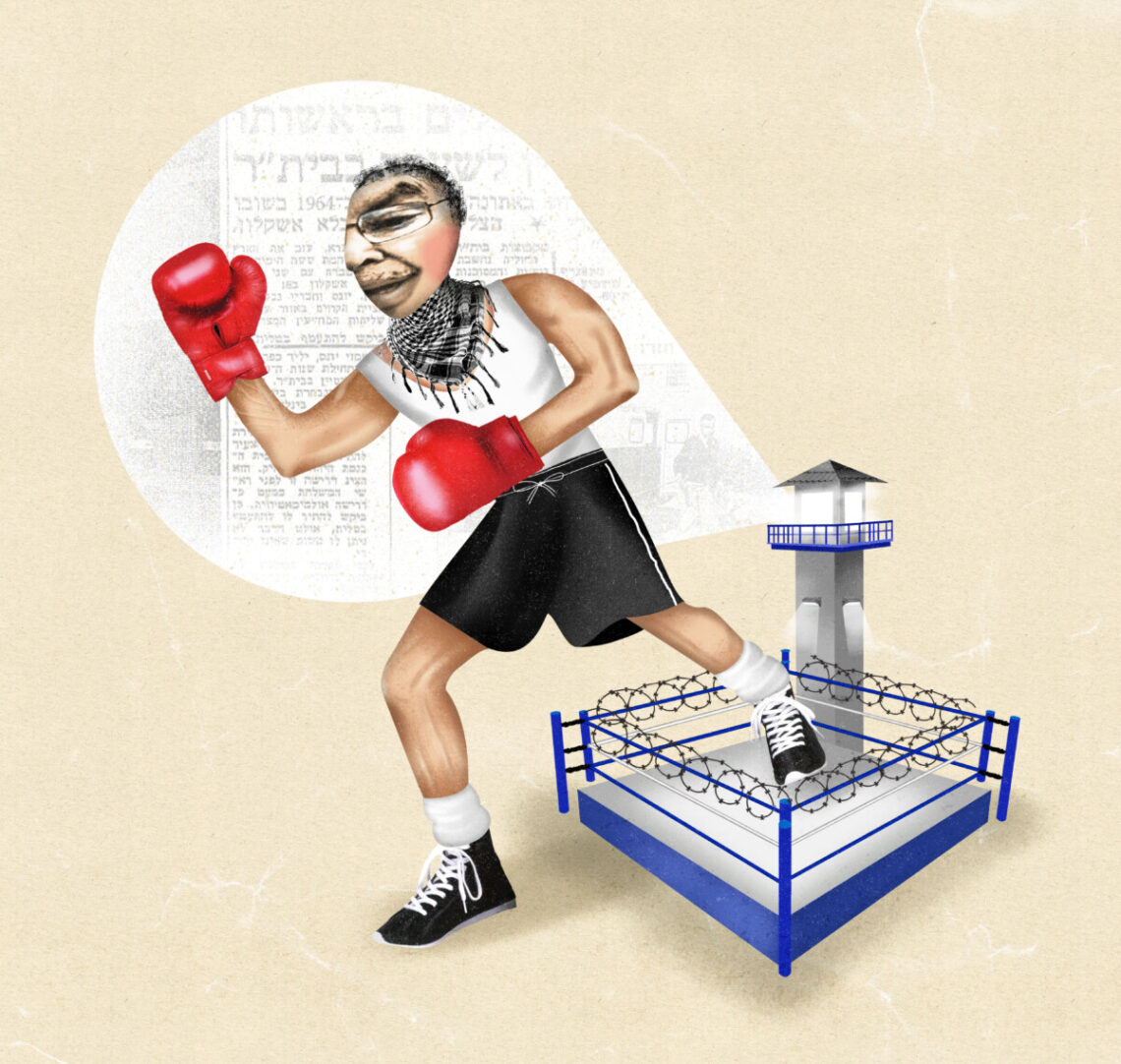 Long story short, we fought them with our fists. The jailers called for help from the police, but we managed to escape the prison and enter an orchard about 200 meters from the prison. When we got out, they were shooting at us.

Hamza Younis is a boxer and a former Palestinian prisoner who was sentenced to seven life sentences and 350 years imprisonment. Younis managed to escape from Israel’s prisons three times: in 1964, 1967, and 1974. He spoke to Yousef Aljamal of Politics Today about how he managed to escape, challenging his jailers to win his freedom despite all odds, and winning his bets twice – one with his jailer who helped him regain his freedom without realizing it and another with his friend who thought escaping Al-Ramla prison in Israel was impossible.

Q. Could you introduce yourself, and tell us a bit about your life? How you were arrested the first time?

My name is Hamza Younis from the village of A’ara in the occupied Palestinian territories of 1948, whose people had the Israeli citizenship imposed on them. I lived in the village with my family and witnessed the Israeli military rule there. After moving between countries, today, I am settled in Sweden. In 1964, over a security charge, I was taken to Ashkelon prison along with my cousin, Makram Younis, where we stayed for 17 days. The Israeli authorities directed seven major charges against us including operating resistance networks and passing the borders without a permission to give information to the enemy.

We met Hafez Masallha from the village of Daburiyya in prison and he had the same charges against him. Of course, when we learned about the charges directed against us, Israelis refused even to allow a lawyer to defend us, so we decided either to die as martyrs or escape from the prison. The plan was to escape at the beginning of the night before 8:00 p.m., since prison cells would be closed then. We sparked a fight in the heart of the prison cells. The jailers opened the doors, and we pushed the door and clashed with the guards. The clash continued until we exited the prison cells and entered the yard.

As we thought, time was not in our favor, because the prison is large, with guards, watchtowers, and support cars. Long story short, we fought them with our fists. The jailers called for help from the police, but we managed to escape the prison and enter an orchard about 200 meters from the prison. When we got out, they were shooting at us. We entered the orange orchard and headed to Gaza. This was on April 17, 1964, and we stayed in Gaza until 1967.

Q. Did you go to Gaza on foot after you escaped the prison for the first time in 1964?

Yes, we went running because we were being chased. We resorted to walking on uninhabited terrain because we knew that the Israeli army, border guards, dogs, and cars will chase us. So, we chose to walk on rough roads near the sea so that we have a way out through the sea if they find us. My cousin, Makram, and I had crossed Lake Tiberias swimming before and I was able to swim well as I worked as a lifeguard at the municipality of Natanya. We arrived at Gaza after running for four hours.

Q. How long did you stay in Gaza before you were captured again? Tell us more about your experience in Gaza. How were you captured in 1967?

I stayed in Gaza until the 1967 Israeli aggression on the Gaza Strip, the West Bank and the neighboring Arab countries. I was injured during the aggression while defending Gaza, and they could arrest me. While I was in prison, my leg’s condition was so severe that I couldn’t even stand on it. When they brought me to investigation, the guards said that if I was moved to the hospital in a normal car, I may not make it because the wound was open, and I needed surgery. Two guards were responsible for me at the English Hospital, but when they saw that I was unable to move on the second floor and that I was peeing in my bed and moving in a wheelchair, they neglected watching me. So, on June 26, 1967, with the help of my friends, I escaped from the hospital.

I fled the hospital and went to the orchards of Northern Gaza. Of course, I was chased, so I hid inside orange trees, I dug holes and covered myself with leaves and grass to be able to breathe and to blur the vision of forces that were chasing me. At night, with the help of the people of Gaza food and medicine would arrive. I started training myself to be able to walk again until I was able to walk for 10 to 12 meters and eventually, I fled to Jordan.

Q. How did you manage to reach Jordan?

Around August 6, 1967, using a Palestinian ID and claiming to be a student and that I needed to go back to my studies, I got out of the West Bank in a car. I arrived in Jordan where I had relatives who took me to a hospital for treatment. Then, I went to Egypt and worked there for a while until I recovered from my wounds. I returned to Jordan and then Lebanon, and joined the Fatah fighters.

Q. Can you tell us about the conversations between you and your jailers. Were they telling you that you wouldn’t be able to escape the Israeli prisons? Was there any conversation about this issue?

There were things that happened, for example, they interrogated me, and I want to tell you about this irony. I mentioned it in my book, Al-Ramla Prison Escape [available exclusively in Arabic]. When I was arrested in 1967 for the second time, I tried to resist, of course, so I fell to the ground. One of the Druze soldiers said that I could kill one of them, and asked the nurse not to provide medical care for me.

The nurse refused, and said, “I am a nurse, and this is a wounded person” and started treating me while I was lying in front of the soldiers. The Druze solider said, “I will kill you. But the commander of the unit asked the solider how would you get rid of a wounded person, who is also a prisoner? You are crazy!”

Q. Were you in good shape when you crossed the borders out of the West Bank?

No, of course not – I was hardly able to walk. I would walk up to 50-60 meters at most. I asked people about the distance from the post to the bridge. They told me that it is 100 meters because the length of the bridge [connecting the West Bank with Jordan] was this. I was in contact with my family and my father and mother came and brought a Jordanian ID to me. I got my hair shaved and changed my clothes and got in the car, and even went to my village before I left. This is no secret anymore because it has been forty years and most people I met with are dead now. I stayed in the village for almost an hour and then they took me to the West Bank, and I took a taxi to the bridge.

Q. Did you plan your escape from prison alone in 1964? Did you study the place to devise a detailed escape route, or did you consult other people before you escaped? What about before at Ashkelon prison?

Me, a cousin of mine, and my partner in the charge, Makram Younis, were arrested. We planned the escape together. Hafez Masalha joined us, and we decided to plan an escape together.

Q. What about planning your second escape from the English Hospital in 1967?

At the English Hospital in Gaza in 1967, it was patient visiting time, and the Israeli occupation of Gaza was recent, so we had a curfew, which was lifted for two hours. During this time, the hospital was receiving thousands of people, as the number of people who died in the hospital every day was about 20-30.

I was in a 10-bed room at the hospital where 30 patients were receiving treatment. I remember that the first time I got there, I lied on the floor. The doctor came and asked me how I was. I said everyone is passing over my head! I told him I knew the size of the shoes of all the hospital workers! He ordered me a bed and they brought nurses from Lebanon. May God reward them for providing treatment for us – they were named Suhaila Bahsous and Nihaya Bahsous. They were training to become nurses in Lebanon.

Q. Did you take advantage of the fact that there were many people visiting the hospital to escape?

At that moment, when my plan was conceived, I started to move in a wheelchair with three wheels and the guards didn’t pay much attention to me because there were many soldiers at the hospital and there was extensive monitoring of people. My condition was too bad to be able to escape. Only female nurses took care of me and would speak to us. I asked some of my friends to come and visit me like Ziad Al-Shobaki, Saleh Al-Ghoul, Kayed Al-Ghoul, Rushdi Al-Khalidi, and Shukri Al-Khalidi.