KUALA LUMPUR, June 30, 2015: Majdi Amro, 36, is lucky compared with his brothers and sisters left in Gaza, Palestine, who still have to live in uncertainty every day of their lives. 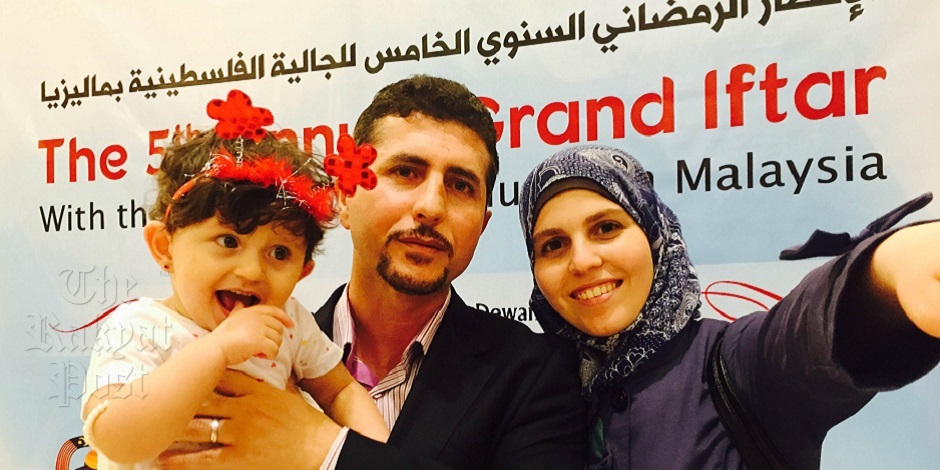 But luck wasn’t always on his side.

When he was 16, unlike other teenagers, Majdi was sent to prison for allegedly throwing stones at the Israeli soldiers.

The next year, he was sent to prison again and this time, the Israeli regime did not tell him why.

His most traumatic experience happened when he was a 24-year-old student studying in Israel. Majdi was chucked into the prison for the fourth time.

“I was in prison for eight years and six months. My youth was wasted away for something I did not do.

“They accused me of rebelling against the Israeli army. I was only 24 and was just a student.

“When they took me, I was on my way back home from university. They just stopped me and took me away,” Majdi told The Rakyat Post.

Majdi, who is currently doing his PhD at Universiti Malaya (UM), revealed that a miracle happened while he was in prison when one of his friends came to visit him.

“My friend brought his sister to the prison because they wanted to visit their brother, who was also there. That was when I saw her and fell in love,” he said with a twinkle in his eyes and a smile that could not be hidden.

“I married my wife, Ayah Shabana, in Qatar, Egypt, after I got out of prison as I wasn’t allowed to set foot in Gaza any more.
“Before that, we just talked on the phone and Skyped. It was the only way for us to stay connected.”

After they got married in 2012, the couple were blessed with a lovely daughter, Saba Amro, who was born last year in Malaysia.
When asked about his family in Gaza, Majdi said that all of his siblings and parents were still there safe, but refused to leave their homeland.

“My parents are in their 70s. I asked them if they wanted to come and stay with me here in Malaysia. I told them it’s safe here, but they refused to. They said they will continue staying there. They want to die in their own birthplace.”

Despite having a safe and happy life here in Malaysia, Majdi said one day he would definitely go back to Gaza and fight alongside his Gazan brothers and bring down the Zionist regime.

“Gaza is my home. I will not let the Israelis steal our land without a fight. I will go back there one day soon, I hope.

“I just have to save enough money to help my people and when I have enough (money), I will go back home.

“I want to make sure my daughter knows where she came from and know what all of us Gazans have been and are still fighting for. It is for her future and the future of all Gaza children.”

In the interview, Majdi also expressed his gratitude towards Malaysians for giving endless support and help to the helpless Gazans.

He said the donations and motivation shown by the Malaysians were the reasons why the Palestinians continued their fight for freedom to this day.

“I want to thank all of my Malaysian brothers and sisters. You have helped us a lot by giving donations, support and motivation.

“Don’t worry about us there. We Palestinians are very strong. We have been living like this all of our lives. We can handle the hardship.

“One thing is for sure. I will not abandon my people there. I will go back and when I do, I will fight till the last drop of my blood.”