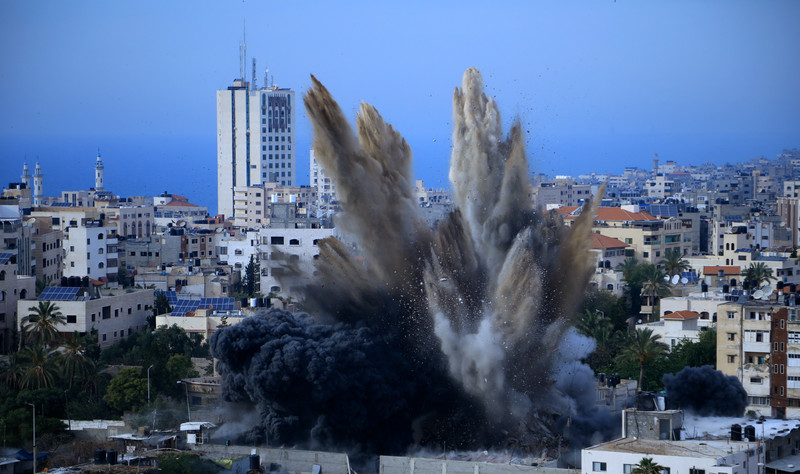 Smoke is seen rising following an Israeli airstrike on a building in Gaza City on 5 May. Israel’s attack on Gaza entered its third day Sunday, as the death toll continued to climb. Ibrahim Khalaf APA images

This article has been updated since initial publication.

Israel’s bombardment of the occupied Gaza Strip entered its third day on Sunday.

By late evening on Sunday, Israeli strikes had killed 19 Palestinians that day, bringing the toll to at least 27 Palestinians slain since Israel escalated its lethal attacks on the territory on Friday.

Health officials in Gaza continued to announce new deaths on an almost hourly basis, including late Sunday night Amani al-Madhoun, a 33-year-old woman who was pregnant.

She is the second pregnant woman to die in the context of the current escalation, although human rights organizations continued to investigate the cause of an explosion that killed a pregnant mother and a young child on Saturday.

Also Sunday evening, the health ministry in Gaza announced that three people had been killed in an Israeli airstrike in the north, including a baby, though few details were immediately available.

In Israel, four people have been killed as Palestinian resistance factions returned fire with barrages of rockets reaching dozens of kilometers into Israel.

Israeli warplanes and artillery have struck more than 100 sites across the besieged territory, totally destroying seven large residential and commercial buildings, at least 14 homes, as well as offices, according to the Gaza-based human rights group Al Mezan.

“The raids have caused fear and panic among civilians,” especially children, who are half of Gaza’s two million population.

In one such attack late Saturday night, an Israeli airstrike completely destroyed a building in Jabaliya in northern Gaza, belonging to Ahmad Abu Zaida. The three-story building had been the home to 16 people including eight children.

Heavy attacks were continuing into Sunday night, according to Palestinians in Gaza.

This video shows the total destruction of a building in the Sabra neighborhood of Gaza City on Sunday evening:

Since Saturday, Israel has completely closed access to Gaza’s territorial waters and closed all goods crossings, except for allowing the entrance of fuel for the territory’s only power plant.

“The crossings cannot be used as an instrument of war to pressure the civilian population in the Strip,” the Israeli human rights group Gisha stated on Saturday. “Even in the current security climate, at a very minimum, humanitarian access must be allowed.”

On Sunday, Israel further escalated the confrontation by carrying out an extrajudicial killing in Gaza – reportedly the first of its kind in four years – when it fired a missile at the civilian car of Hamed Ahmad Abed al-Khoudari, whom it claims was responsible for transferring money to Gaza from Iran.

Palestinian media posted video of the car moments after the Israeli missile attack:

Media circulated this photo of al-Khoudari following his death:

Israel’s resort to this tactic may be a sign that it feels that its strategy has so far failed to dictate an end to the confrontation on its own terms – effectively that Palestinians return to a status quo of granting Israel peace and quiet while Gaza remains under an unrelenting blockade that is causing the humanitarian situation in the territory to spiral downwards.

“Efforts by the United Nations and Egypt to broker a ceasefire between Israel and terror groups in the Strip yielded no concrete results as of Sunday afternoon, as neither side appeared interested in returning to the conditions laid out before the outbreak of violence,” The Times of Israel reported, using derogatory terminology Israel uses to describe Palestinian political and military resistance organizations.

The publication added that on Sunday “the Israeli security cabinet held a meeting about the fighting in Gaza and later instructed the military to intensify its attacks in the Strip.”

The current escalation has been blamed by analysts and diplomats on Israel’s refusal to implement understandings to ease the siege on Gaza, reached in order to end the last major confrontation prior to Israel’s 9 April election.

Israeli leaders have been demanding more violence against Palestinians in Gaza.

“We must increase our reaction in Gaza until there is quiet, and to return to targeted assassinations,” Israeli public security minister Gilad Erdan said.

But any return to “quiet,” even if a ceasefire is reached, will be short-lived without a fundamental change in Israel’s policy.

“There is no military solution that can usher in long-term quiet,” Gisha stated.

“Regional stability will only be made possible once Israel makes substantial, forthright steps to protect the human rights of Gaza’s two million residents and allow the Strip’s shattered economy to recover and develop.”

“Ceasefire agreements and ‘gestures’ by Israel to ‘ease’ the closure on Gaza cannot substitute long-term solutions, including an end to the occupation,” the Israeli human rights group added.

There is also likely to be little change while the so-called international community continues to favor Israel.

On Sunday, United Nations envoy Nickolay Mladenov, who has been attempting to broker a ceasefire, issued a one-sided condemnation of Palestinian rocket fire into Israel, but no condemnation of Israel’s attacks on Palestinian civilian sites and its collective punishment of the entire population in Gaza:

Israel says that more than 600 rockets have been fired from Gaza, claiming four lives.

On Sunday, rockets fired by Palestinian resistance factions reached as far as Bir al-Saba, called Beersheva by Israelis, some 40 kilometers from Gaza.

Moshe Agadi, 58, died of shrapnel injuries he sustained from a rocket that hit a family home in Ashkelon overnight Saturday. He was pronounced dead at Barzilai hospital in Ashkelon on Sunday.

Zaed al-Hamamda, 50, was killed when a rocket hit a factory in Ashkelon on Sunday afternoon.

He was a resident of a Bedouin community, according to the newspaper Haaretz.

Another person who was not immediately named was killed in that same attack.

A fourth Israeli in the port city of Ashdod was pronounced dead Sunday afternoon after sustaining shrapnel wounds.

On Saturday, the joint operations room of Palestinian resistance organizations had warned that armed groups would extend the range of their targeting if Israel continued its attacks on Palestinian residential buildings.

Islamic Jihad, one of the main resistance factions, warned that it could target Israel’s nuclear facility at Dimona and disrupt the Eurovision Song Contest that is being hosted in Tel Aviv from 14 to 18 May.

The group’s military wing claimed on Saturday that it had fired a new type of rocket with a more powerful warhead “in response to [Israel’s] targeting of civilians, children and residential buildings.”

Erdan, the Israeli minister, said in response that Eurovision “should not be a consideration of the intensity of the blow” Israel would deal against Palestinians in Gaza.

Israeli schools were canceled across the south on Sunday.

Gaza’s education ministry announced that schools are free to decide whether or not to close.

Gaza has no bomb shelters.

Pictures of the two circulated on social media following their death:

Another Israeli missile strike on a resistance facility in al-Shujaiyeh neighborhood of Gaza City killed two fighters from the same military wing.

Pictures of them circulated in local media:

Saba Mahmoud Abu Arar, a child of one and a half years, and her pregnant mother, Filastin Saleh Ahmad Abu Shihma, 35, died after an airstrike reportedly hit their family’s home east of Gaza City on Saturday.

Another child in the home was moderately injured, according to the Gaza health ministry.

Early Sunday, the Israeli army stated that “Palestinian weapons caused the tragic death of a mother in Gaza and her baby,” adding that its “assessment indicates that the incident had nothing to do with [Israel Defense Forces] strikes.”

The Gaza-based Palestinian Center for Human Rights said the origin of the airstrike remains “undetermined” and its field workers are “still investigating the circumstances of the explosion.”

Al Mezan also did not attribute a cause for the explosion that killed the mother and child.

“The Israeli government thinks it’s a fantastic idea to keep more than two million people, half of them children, living in a caged ghetto cut off from the outside world,” Abunimah said.

“As long as Israel thinks this is a really great way to treat two million people in the Gaza Strip, this will keep happening, because people in Gaza have to get the message out that they are human,” Abunimah added.

“Israel cannot continue to terrorize and besiege and kill them in this way and have a lovely Eurovision Song Contest where it falsely presents itself to the world as this lovely peaceful holiday destination which is just being terrorized by these awful people in the Gaza Strip.”