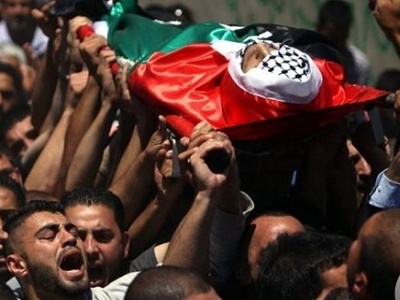 Israel agreed to the return of 7 Palestinian bodies. (Photo: via Ma’an, file)

The Israeli government has decided to hand over the bodies of seven Palestinians back to their families to bury them after holding their bodies for months. The decision came following a petition made by Al-Quds human rights organization based in Jerusalem to the Supreme Israeli Court.

Ameen Albayed of the Committee to Regain the Bodies of Palestinian Martyrs held by Israel said, “The Israeli government agreed to release the bodies of seven Palestinians it holds and agreed to study the profile of three others.”

Albayed noted that the Israeli government decided to study the profiles of three other Palestinians whose bodies are still being held by Israel. They are of Mohammed Tarayra and Mohammed Alfaqih from Hebron and Abdulhameed Abusrour from Bethlehem.

The bodies of the seven Palestinian will be handed over to the Palestinian Coordination Body. The Israeli government didn’t set a date for handing over the bodies, but it is expected to happen in the coming few days.