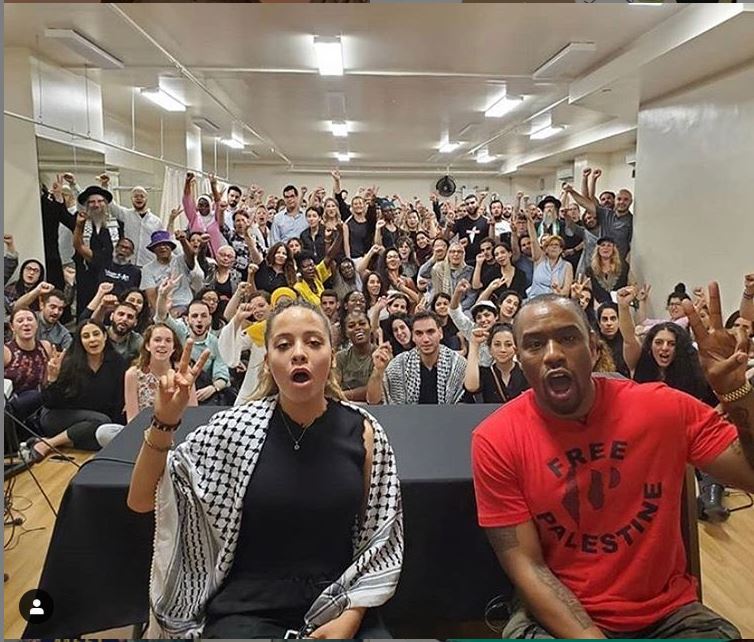 Janna Jihad, the 13-year-old journalist from Nabi Saleh in occupied Palestine, spoke in New York City at Pearl Studios with Marc Lamont Hill on Thursday, 18 July. The event, organized by Existence is Resistance and Within Our Lifetime – United for Palestine, was also supported by Samidoun Palestinian Prisoner Solidarity Network.

Janna, the cousin of Ahed Tamimi, began reporting on the occupation when she was seven years old after two of her family members were murdered by Israel. She is one of the youngest recognized journalists in the world. Hill, who was fired from CNN after giving a speech at the United Nations supporting Palestinian rights, is a professor at Temple University. Both speakers shared an informative exchange about the Black and Palestinian movements, their similarities, differences, histories and trajectories.

Turnout for the event was overwhelming, requiring organizers to set up an overflow room for people to watch a live video feed at the last minute. In addition, members of the far-right, extreme Jewish Defense League attempted to enter the event, but were prevented from doing so after they were spotted by activists in the crowd. The event was attended, among others, by former political prisoner of the Black Liberation Movement, Sekou Odinga, jailed in U.S. prisons for over 33 years.