Zwelivelile Mandela says Israeli apartheid is the worst form of apartheid ever witnessed. 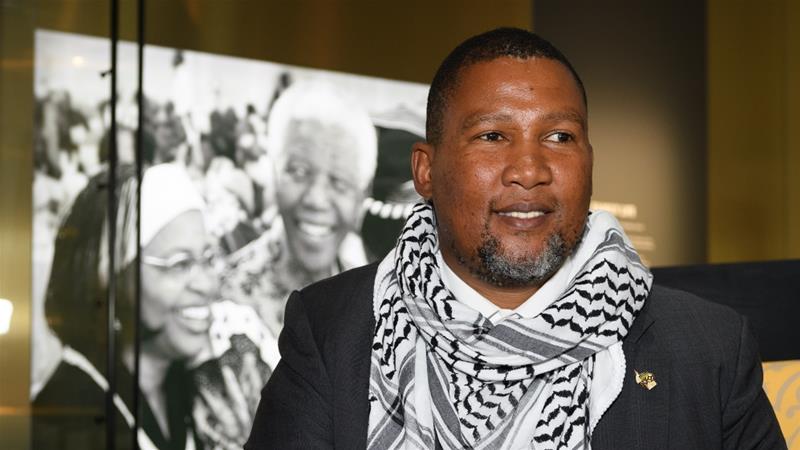 Mandela sketched out a damning picture of the discrimination experienced by the Palestinian people [File: Leon Neal/Getty Images]

London, United Kingdom – The grandson of anti-apartheid hero Nelson Mandela has delivered a damning condemnation of “Israeli apartheid”, in a high-profile expression of solidarity between South Africans and Palestinians.

Zwelivelile Mandela, an MP of the ruling African National Congress (ANC), made the comments on Saturday at the Palestine Expo, an annual event in London aimed at showcasing Palestinian history, heritage and culture. Last year, it attracted 15,000 visitors.

Addressing a large audience, Mandela said that the Nation-State Law passed in 2018 declaring Israel to be the historical homeland of the Jewish people “confirmed what we have always known to be the true character and reality of Israel: Israel is an apartheid state”.

He also outlined what had constituted apartheid for black South Africans – from the creation of bantustan reservations to land expropriation and the daily assault on dignity.

“All these characteristics were present in apartheid Israel since its inception but have now been codified and given a constitutional status and expression by the Nation-State Law.

“Apartheid Israel perpetuates statutory discrimination through the very definition by the law as a Jewish state; by doing so it renders non-Jews as second-class citizens, alternately as foreigners in the land of their birth.”

Also speaking at the event was Israeli journalist Gideon Levy, who criticised efforts by the United States to resolve the Palestinian-Israeli conflict through investment.

He told the London audience that not only could the deal not be taken seriously, but if it were pursued it would put an end to “all Palestinian rights and aspirations”, and added that, as a result, a global intervention was now required to put pressure on Israel.

“We need the world because Israel will not change by itself – as long as Israel and Israelis are not punished and don’t pay for the occupation, for the crimes, don’t expect any change. It will not come from within Israel.”

Levy was also scathing about how Western politicians and media have succumbed to a “very efficient” campaign by Israel to label any criticism of the country’s activities as anti-Semitic.

“Here we face now a new stage in which criticising Israel becomes not only impossible but almost criminal. I have never seen such a phenomenon in which struggling for justice becomes criminalised – this is unheard of.

Ilan Pappe, a professor at the University of Exeterand director of the European Centre for Palestinian Studies, also blasted the mainstream media’s coverage of Israeli activities and how these have been concealed behind the “fabrication of institutional anti-Semitism”.

Pappe said it was important to acknowledge the historical context in which the treatment of Palestinians in areas such as Gaza had taken place.

“Unfortunately, the world doesn’t know what goes on in Gaza. In this country, the mainstream media, whether it is Sky News or the BBC, or the main newspapers, don’t mention the Gaza Strip.

“They mention every word that they think attests to institutional anti-Semitism in the Labour Party but they would not mention what happened yesterday when 49 young Palestinians were shot by Israeli snipers. Neither did they mention the 52 who were shot last week.”

Human rights activist Issa Amro, who is based in Hebron – which is at the sharp end of Israeli settler appropriation of Palestinian land – told attendees that the city had become the “micro-centre of apartheid, discrimination and segregation”.

Amro described his activism trying to resist the growing scale at which Palestinian homes were being demolished by the Israeli authorities in order for settlers to take their land and resources.

He said demolitions had increased significantly since Donald Trump became the US president in early 2017, and current Israeli policy was to now even require some Palestinians to demolish their own homes.

“Don’t be afraid of ‘anti-Semitism’ because the message of this conference should be that criticising Israeli human rights violations is not anti-Semitism,” he said.

Daphna Baram, director of the Israeli Committee Against House Demolitions UK, outlined the scale of demolitions, pointing out that 201 Palestinian structures were demolished in June alone – bringing those destroyed since 1967 to 49,336.

“This has been the design of the Israeli government for generations to get rid of the Palestinians and make them go away in various ways, shapes and forms, and one of the main ways to do this is by house demolitions.”

Palestinian journalist and author Ramzy Baroud – who had just returned from a 10-day solidarity tour to Kenya – told the event in the UK capital that a new front in Palestinian activity should be aimed at the developing world.

Palestinian activism had neglected the “global south” because of the Oslo peace process and a changing discourse that had convinced people that their fate lay in the capitals of the developed world.

“But Israel has rediscovered the global south and they have penetrated Africa and South America and other places,” Baroud said. “We need to go back there and we need to resurrect their solidarity.

“One thing about Africa that I noticed is that we don’t have to contend with the tiny little bits of the discourse – nobody accuses you of anti-Semitism, it is not even on the agenda of African audiences: what they talk about there is national liberation.”