Khader Adnan will end his 55-day long hunger strike and will be released on July 12, his lawyer tells Al Jazeera.

Hunger-striking Palestinian prisoner, Khader Adnan, will be released in two weeks from Israeli prison, his legal counsel has confirmed with Al Jazeera. 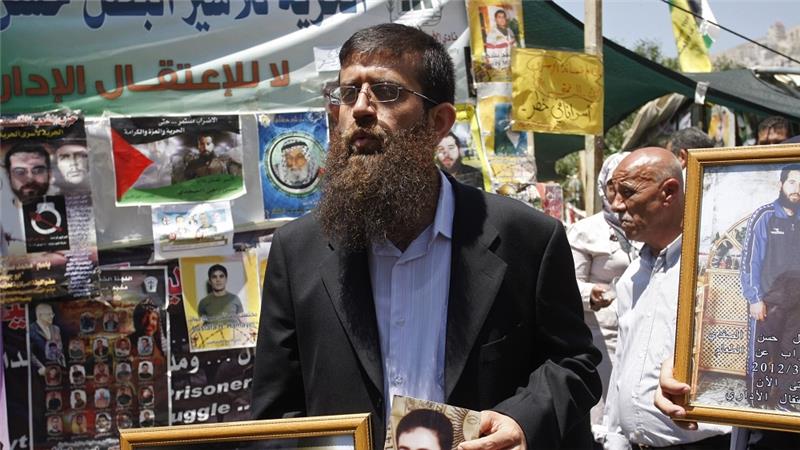 Adnan has been held for 11 months in so-called ‘administrative detention’, which is used by Israel to imprison Palestinians without charging them [AP]

Adnan has agreed to end his 55-day long hunger strike, and is due to be freed on July 12, Jawad Boulos, legal counsel for the Ramallah-based Prisoners Club, said on Sunday.

Boulos said that as part of the deal, the Israelis also pledged not to detain him again under the guidelines of so-called “administrative detention” without indictment or trial, adding that his family has been informed.

Adnan has been held for 11 months under “administrative detention”, which is used by Israel to imprison Palestinians without charge or trial. It was his ninth detention.

The Palestinian is currently at a clinic in Israel’s Ramla prison, where he was placed under medical supervision earlier this month.
On Sunday his family was allowed to visit him at the clinic near Tel Aviv, for the first time since he began his hunger strike in protest against his imprisonment.

He has become a symbol of Palestinian resistance since he went on his first hunger strike that lasted for 66 days. He ended that strike after a deal was reached for his release in February 2012.
Israel’s security service, Shin Bet, believes Adnan is a member of the Islamic Jihad group, which had warned that Adnan’s death would shatter the relative calm in Gaza.

Earlier in the day, UN’s top Middle East envoy Nikolay Mladenov expressed his concern on the fate of Adnan as his health deteriorated.