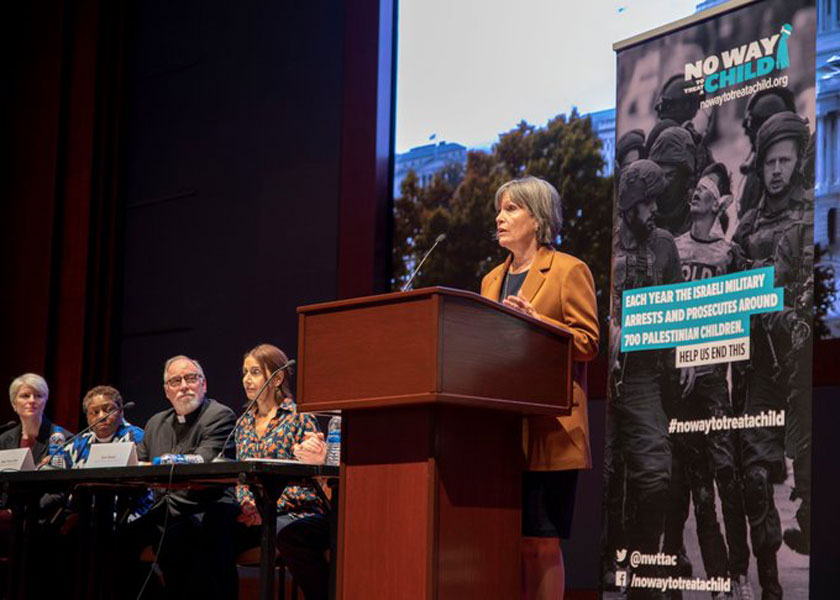 As the eyes of the mainstream media were fixated on impeachment hearings occurring on Capitol Hill, something even more distinct was taking place in Congress on Nov. 20: A hearing defending the human rights of Palestinian children.

Organized by the American Friends Service Committee and featuring an ecumenical panel of Christian leaders, the hearing was a rare instance of the policies of the State of Israel being openly questioned by a member of Congress. McCollum, a retired social studies teacher, addressed the “controversial” topic in a calm, matter-of-fact and genuine manner, lending credibility to her assertions.

“Today we’re gathered here to discuss a completely preventable, completely destructive and a completely immoral practice,” McCollum began. “It’s inflicting abuse, torture and trauma on children—and it is the Israeli state-sponsored system of military detention of Palestinian children—children who are already living every day of their lives under an oppressive military occupation.”

According to Defense for Children International-Palestine, the Israeli military arrests and prosecutes over 700 Palestinian children every year. Many of these children are dragged away from their families in night raids, blindfolded for hours, abused and detained for months at a time.

“Not a single dollar of U.S. taxpayer funds should be allowed to support what is an explicit violation of international humanitarian law,” McCollum continued. “The fact that our taxpayer dollars are helping to support the Israeli occupation and putting Palestinian children in military prisons is a disgrace and it undermines our most fundamental values as Americans.”

McCollum said her bill is not about singling out Israel; rather it is intended to subject the country to legitimate scrutiny. “Israel should not be immune from criticism while it imprisons Palestinian children, demolishes Palestinian homes and annexes Palestinian land,” she said. “I want justice, equality, peace, security and freedom for the Palestinian people, and I want the same things for the people of Israel.”

Israel, McCollum implored, must comply with the provisions of Article 37 of the Convention on the Rights of the Child (which has been ratified by all U.N. member states, except the United States). The article, in part, states, “No child shall be subjected to torture or other cruel, inhuman or degrading treatment or punishment….[or] deprived of his or her liberty unlawfully or arbitrarily….Every child deprived of his or her liberty shall have the right to prompt access to legal and other appropriate assistance, as well as the right to challenge the legality of the deprivation of his or her liberty before a court or other competent, independent and impartial authority, and to a prompt decision on any such action.”

Israel’s disregard for international law leaves the U.S. with a simple choice, McCollum said. “We can give a green light to U.S. security assistance to Israel being used to imprison and torture children, or we can ensure accountability and transparency with our tax dollars and condition our aid to Israel to include a prohibition on military detention of children.”

McCollum described her decision to advocate for Palestinian children as a moral one. “Once I leaned about the night raids, the arrests, the forced confessions, the trauma inflicted on thousands of Palestinian children, some as young as eight, nine, ten years old—once I knew about it I could not turn away,” she said. “I could not say ‘those children, they’re not my problem.’”