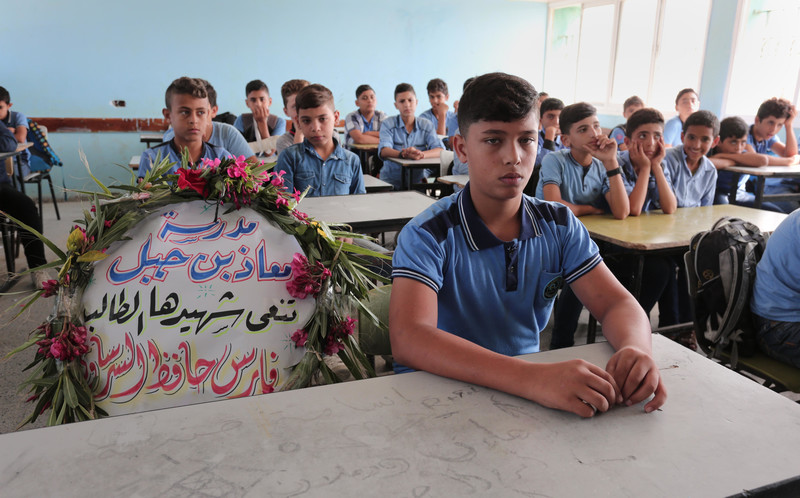 A wreath stands in the place of Faris al-Sarsawi at his school in Gaza City on 7 October 2018. The 13-year-old was fatally shot in the chest by an Israeli sniper two days earlier. Ramadan El-Agha APA images

On Tuesday, the UN released the secretary-general’s annual report on children in armed conflict.

It finds that a record 12,000 children were killed or maimed in wars around the world in 2018.

But Human Rights Watch notes that Guterres “omitted countries responsible for grave violations against children in armed conflict in his new ‘list of shame.’”

The group notes that the list leaves off the Israeli military, the Afghan National Army and US-led international forces in Afghanistan.

“By listing selected violators but not others, Secretary-General Guterres is ignoring the UN’s own evidence and undermining efforts to protect children in conflict.”

Indeed, evidence of Israel’s crimes is in the secretary-general’s report: Israeli occupation forces killed 56 Palestinian children in 2018. An Israeli settler killed a 57th.

That is a four-fold increase over the number of children Israel killed the previous year.

More than 30 of the children killed last year were shot dead in Gaza, as Israel unleashed snipers to deliberately target unarmed civilians with lethal force in the context of Great March of Return protests.

Nine out of 10 “were shot by live ammunition to the upper body, while reportedly posing no imminent threat of death,” the UN report states.

More than 2,500 Palestinian children were injured in 2018, more than double the number the previous year, the UN found.

An Israeli general, Zvika Fogel, admitted openly that Israeli soldiers were under orders to aim their rifles at the “small body of a child.”

An independent UN commission of inquiry called for Israeli officials to be sanctioned and brought to justice over suspected war crimes and crimes against humanity in Gaza.

The new UN report documents other widespread violations of Palestinian children’s rights by Israel including arrests, detention and mistreatment, and disruption to their education.

“Although he listed the Saudi Arabia-led coalition in Yemen, he once again included the coalition in a category of parties taking steps to improve, despite overwhelming evidence that coalition forces killed and harmed children on a large scale in 2018,” the group said.

Some 1,700 children were killed or maimed in Yemen last year, according to the UN report.

Save the Children notes that half of the child casualties “were a result of attacks by the Saudi- and Emirati-led coalition, in addition to 15 attacks on schools and hospitals.”

By leaving Saudi Arabia and the United Arab Emirates off the list of shame, Guterres is “failing to hold the coalition to account for yet another year of bombing children in their homes and schools,” Save the Children CEO Carolyn Miles said.

“This decision shows that the secretary-general has placed politics before children, and that states with powerful friends can get away with destroying children’s lives with impunity.”

In 2015, Ban Ki-moon, then UN secretary-general, caved in to pressure from the US and Israel and removed Israel from the list of shame.

In doing so, Ban rejected an official recommendation from his own special representative for children and armed conflict and numerous human rights organizations and child rights defenders.

Ban’s act was particularly egregious since that year’s report found that the number of children killed in the occupied West Bank and Gaza Strip in 2014 was 557 – the third highest only after Iraq and Afghanistan and ahead of Syria.

The bullying to which Ban yielded seems to have had a lasting effect.

His successor appears just as willing to shield Israel and other powerful parties from accountability for their crimes.