Home > News About Prisoners > Ahmad Al-Manasra: A Palestinian Child Who Grew up Behind Israeli Bars 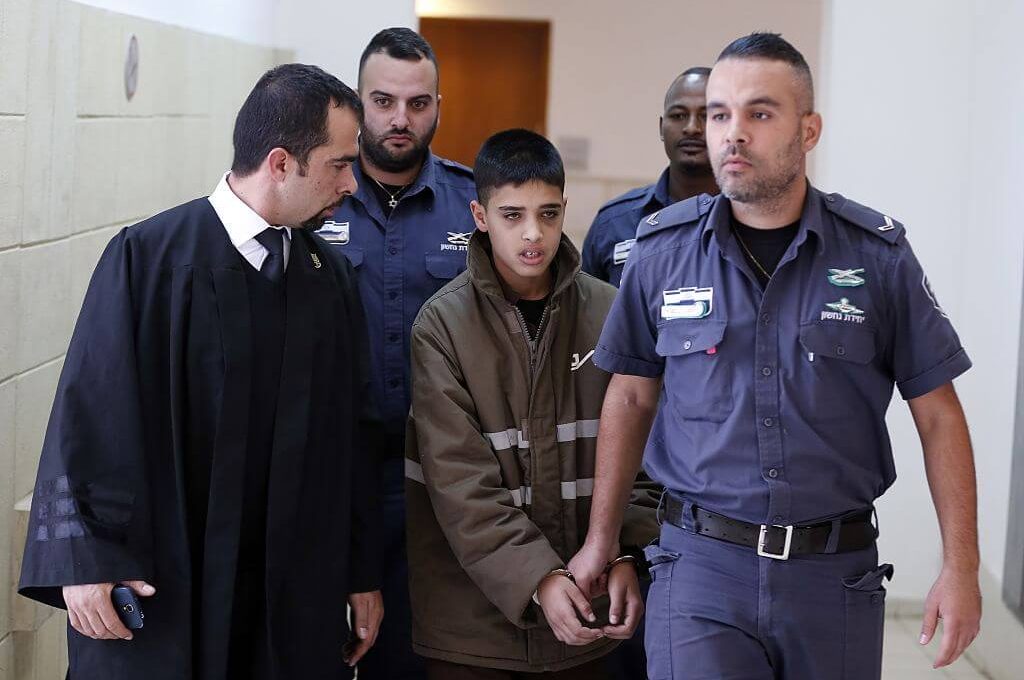 Ahmed Mansra is escorted by Israeli security during a hearing at a Jerusalem court on October 30, 2015. Photo by AHMAD GHARABLI/AFP via Getty Images.

A video of an Israeli interrogator violently interrogating then 13-year-old Palestinian child prisoner Ahmad Al-Manasra went viral in November 2015. In the video, Al-Manasra repeatedly told his Israeli interrogator that he couldn’t remember as his interrogator screamed at him, accusing him of not telling the truth. Ahmad was referring to the day his cousin Hassan, 15, was killed in Jerusalem, and he himself was injured and left to bleed on the ground after being run over by an Israeli car.

The ramming attack took place after Israeli settlers accused both Ahmad and Hassan of attempting to carry out a knife-stabbing attack. Meanwhile, Israeli settlers cursed him, damning him to death, and the Israeli police—as seen in videos of the incident—kept watching.

The Israeli occupation authorities have a separate military judicial system before which Palestinians are brought to court, unlike Israelis who live in the same area in illegal settlements in the West Bank. Palestinians brought before military courts are handed tough sentences and their conviction rates are extremely high. Since Israeli law does not allow convicting children below 14, the Israeli authorities waited for Al-Manasra to turn 14 before convicting him, handing him a sentence of 12 years. Al-Manasra’s sentence was later reduced to 9.5 years.

Following much physical and psychosocial violence, Al-Manasra’s mental health has deteriorated significantly—a process that only got worse when he was placed in solitary confinement. The Israeli Prison Service (IPS) has isolated Al-Manasra since November 2021, claiming that his mental health is not stable and putting him with other inmates might cause harm to them!

The imprisonment conditions of Palestinian prisoners, especially child prisoners, has been documented by various human rights groups. Defense for Children International-Palestine (DCI-P) notes that three out of four Palestinian prisoners are subjected to ill-treatment and torture at the hands of Israeli forces from the moment of their arrest.

The case of the five Hares boys from Hares village in the West Bank speaks of this injustice. In 2013, five Palestinian children were snatched from their families and sentenced to 15 years in prison after being accused of throwing stones at an Israeli truck driver who lost control of the steering wheel, a charge they denied and later some of them confessed to under torture, according to their families.

The Israeli truck driver claimed the incident caused a traffic accident that resulted in the death of an Israeli settler, first said the incident was due to a flat tire and later changed his narrative, which Israeli courts adopted. The Hares boys had to sign confessions in Hebrew, a language they don’t understand.

The issue of Palestinian child prisoners is generational. It is no surprise that Tariq Bargouthi, the Palestinian lawyer of Ahmad Al-Manasra, was himself a child prisoner in 1991. Israeli forces arrested him in an attempt to pressure his brothers to hand themselves over.

Read: A Shared Struggle: How A Book Brought Palestinian and Irish Hunger Strikers Together

The family of Al-Manasra held a press conference in February this year during which they revealed more information about their son’s mental health. The family noted that “Ahmad was severely beaten when arrested, which caused a fracture in his skeleton that caused him to suffer from hemangioma.” They went on to say that “due to the extreme psychical and psychological suffering he was exposed to, Ahmad has been suffering from severe headaches.”

The family added, “The repeated placement of Ahmad in solitary confinement [For four months now], along with psychological and physical torture, and depriving him of the needed medication has resulted in psychological disorders, which got only worse by isolating him from the rest of prisoners.”

Al-Manasra’s family stressed that the Israeli authorities refused to release him from solitary confinement and put him in the normal prison sections as recommended by a mental health specialist who was able to pay him a rare visit. The specialist condemned the Israeli authority’s claim that the reason for placing Al-Manasra in solitary confinement was to protect him and the rest of the prisoners following the deterioration of his mental health.

In a recent statement, Al-Manasra’s mother called for his immediate release, noting that her son is “a child whose condition would make a stone cry.” She added that her son needs her and that not being able to meet face to face is costing him dearly.

In light of this reality and following a call for solidarity with Ahmad Al-Manasra by his family, an international campaign was launched. The hope is that this call for solidarity will pressure the Israeli authorities to improve his prison conditions and move him to the regular prison sections.

Palestinian child prisoners should receive the attention of the world whose deafening silence allows for the violations against them to continue. Such efforts should build on previous campaigns and initiatives including “No Way to Treat a Child,” a campaign launched by the American Friends Service Committee (AFSC) of the Quaker Church in the U.S. Legal actions should be taken in various parliaments across the globe to provide protection for Palestinian children.

The U.S. House of Representatives draft bill 2407 calls for linking American foreign aid to countries’ treatment of children, including Israel. The bill calls for making sure that Palestinian children’s rights are not violated by American tax money. Other draft laws and bills could be introduced at a national level in other countries to build more pressure on Israel to end its military occupation of Palestine.

Ahmad Al-Manasra could not remember the day he was shot and humiliated by Israeli settlers in Jerusalem. It is the same day that many advocates for Palestinian human rights vividly recall: it was the day Ahmad lost his best friend and cousin Hassan, and he himself was left to bleed on the ground as Israeli settlers cursed him and wished for his death.

The free people of the world should always remember Ahmad Al-Manasra as a victim of the ongoing settler violence and an Israeli judicial system designed by settlers to serve their interests exclusively. The least the world can do today to highlight Al-Manasra’s plight and ongoing suffering is to join the campaign that calls for his immediate release, as a court hearing is set for him on April 13, 2022, so that he can have access to much needed medical care.