Prior to the U.S. House of Representatives’ approval on July 23 of anti-BDS resolution, H. Res 246, the BDS movement condemned the resolution, saying that it is based on lies and aims to to demonize peaceful resistance to Israel’s military occupation and apartheid.

On behalf of the Palestinian-led BDS movement, Omar Barghouti said:

This anti-Palestinian resolution would directly undermine the First Amendment of the U.S. Constitution. It reinforces other McCarthyite anti-BDS laws, and will have a chilling effect on free speech, especially speech that is critical of Israel’s military occupation and apartheid.

H. Res. 246 includes outright lies about the peaceful BDS movement. BDS campaigns against institutions and corporations that are directly complicit in violations of Palestinian human rights. It doesn’t target individuals. The BDS movement targets complicity, not identity and has a zero-tolerance policy of racism, sexism and all forms of discrimination, including antisemitism.

We applaud H. Res. 496, sponsored by Ilhan Omar, Rashida Tlaib and John Lewis, for affirming that the right to boycott as a time-honored, constitutionally protected practice employed to oppose systems of injustice.

This resolution is based on lies and aims to to demonize peaceful resistance to Israel’s military occupation and apartheid.#BDS #RightToBDS #RightToBoycott 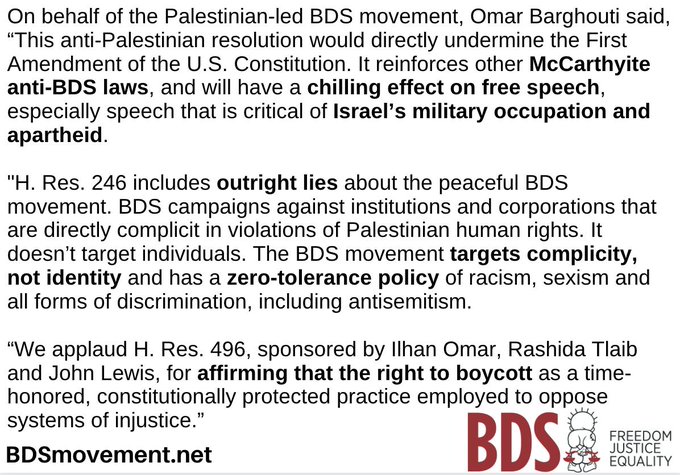 500 people are talking about this
0
SHARES
FacebookTwitter