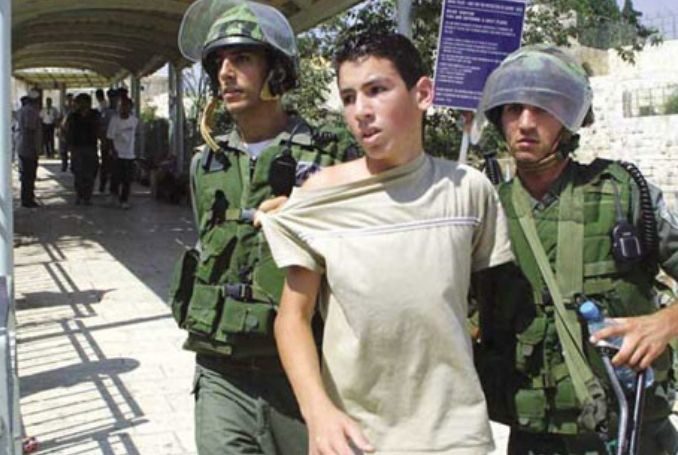 Five Palestinian minors said they were severely beaten and tortured by Israeli soldiers and interrogators during detention, today said the Palestinian Commission for Detainees and Ex-Detainees Affairs.

The Commission said it got affidavits from the five minors, who gave details of the beating and torture they were subjected to at the hands of Israeli soldiers and security agents during arrest and interrogation.

Mustafa Salameh, 17, was detained at his family home in Azzoun town, east of the northern West Bank city of Qalqilya. He was beaten with the butt of guns, smacked and kicked around, then shoved into an army jeep where he was thrown on the floor as soldiers kept trampling on him with their army boots, and kicking him while cursing him.

Salameh said in his affidavit that he lost consciousness after that for a while and when he woke up he found himself in Jalama detention center where he was later interrogated for long hours while tied to a chair before being moved to the Majeddo prison for minors.

Mohammad Zalloum, 17, was detained at his family home in the Silwan neighborhood of occupied East Jerusalem. He was dragged out of his house, severely punched on his stomach causing him to vomit and then moved to Asqalan detention center where he was kept in the cells for 23 days, occasionally severely beaten.

Hani Rmeilat, 17, from Jenin refugee camp in the northern West Bank, was interrogated in difficult conditions at Jalama detention center, assaulted with clubs by five prison guards causing him bruises on his body which required hospitalization at an Israeli hospital, after which he was taken back to the Jalama prison where he was kept for 20 days before being moved to Majeddo prison.

Majd Waari, 17, from Beit Hanina neighborhood of East Jerusalem, underwent severe interrogation at the infamous Russian Compound detention center in West Jerusalem for several hours while tied up on a small chair, smacked on the face and insulted.

Munir Arqoub, 17, from Kufr Ein, north of Ramallah, was detained at the Beit El military checkpoint north of Ramallah, attacked by three soldiers and thrown to the ground, beaten severely, then thrown into an army jeep before he was taken to a nearby military base. He was there left in an open area during cold weather conditions for several hours and denied sleep. He was taken the next day to Ofer military camp and detention center for interrogation and then moved to Majeddo prison.

The Commission said Israel is holding 170 Palestinian minors in its prisons, most of them were subjected to some form of cruelty, abuse, and brutality during their arrest.