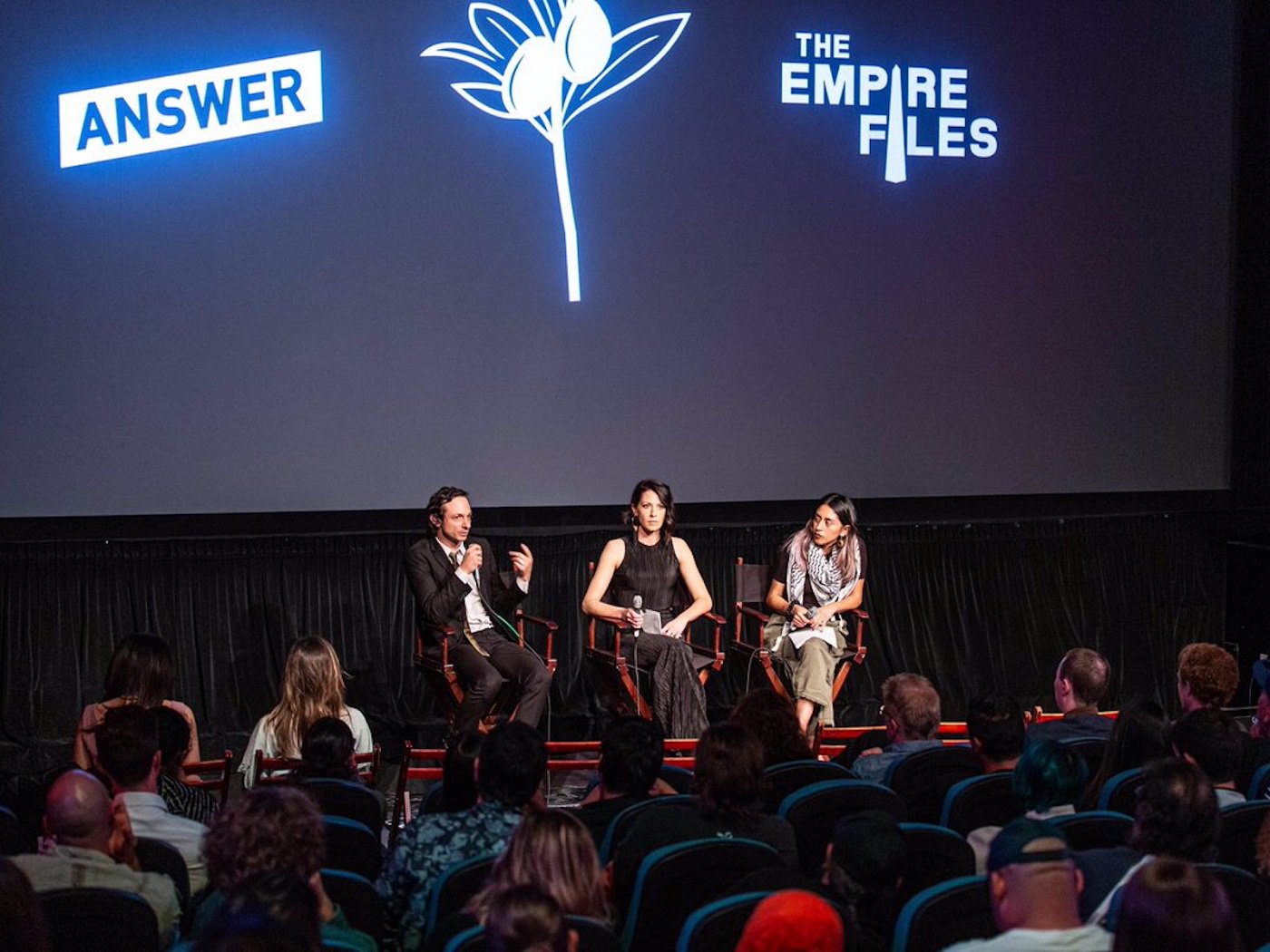 More than 300 people filled the Downtown Independent movie theatre in Los Angeles on June 20 for the premiere screening of Gaza Fights for Freedom, an independent documentary directed and written by Abby Martin, and produced by Mike Prysner, both of The Empire Files. Gaza Fights for Freedom depicts the ongoing Great March of Return protests in the Gaza Strip,  occupied Palestine, that began in 2018. Israeli state forces have so far killed over 150 Palestinian participants, and injured over 10,000 more, many with life-changing injuries.

Co-sponsored by the ANSWER Coalition, The Empire Files, Codepink Los Angeles and the Al-Awda Right to Return Coalition, the premiere was a fund-raiser for future solidarity organizing and for Empire Files productions. The Empire Files was first broadcast on teleSUR in Latin America the progressive television network created by the governments of Venezuela, Bolivia, Cuba, and Nicaragua.  The show has struggled to stay in production since 2018, when the  Trump administration sanctions on Venezuela blocked wire transfers between teleSUR and its affiliates.  Gaza Fights for Freedom, a feature-length film, was funded entirely from contributions by supporters and viewers.

The documentary was made during, and depicts,  the Great March of Returnprotests, whose images Palestinians of slain medics, journalists, women, children, and disabled people resounded throughout the world in 2018. The Trump administration’s deepened support for the most extreme Israeli positions is also displayed in the film, with clips of Trump’s moving of the U.S. embassy in Israel to Jerusalem and preparation for the “Deal of the Century.”

The government of Israel tightly restricts the presence of journalists in the Gaza. In order to work around these restrictions, The Empire Files team collaborated with Palestinian videographers from Gaza.

Gaza is  the 25-mile long, seven-mile wide strip of occupied and blockaded land that the World Health Organization has said will be unfit for human occupation by 2020. The description of Gaza as an “open-air prison” is commonly used these days, but Gaza Fights for Freedom gives a visceral and painful view of this descriptor. Narrated by Martin, the camera winds us through the streets of Gaza, through the rubble of past Israeli aerial assaults–2008, 2012, 2014, and intermittent years.  The attack in 2014 alone destroyed nearly 20,000 homes. Gaza is unable to recover from this destruction, rebuild or remove the debris due to the blockade. The film takes us through densely populated cities, where families have no choice but to drink water unsafe for consumption.

The film highlights injustices in Gaza that are so cruel as to be unbelievable: Israel cutting back exit permits for Palestinians in Gaza in need of medical treatment to under 50% by 2018, leaving many to die  from illnesses like cancer, or from  injury sustained by bombings, , unsafe water, or attacks from the Israeli army; electricity outages that give residents around 4 hours of electricity a day; the staggering poverty, unemployment (over 50% and growing), and malnutrition that one Israeli government advisor called “putting Palestinians on a diet.” The film shows a Palestinian father, surrounded by his family, discussing  the everyday cruelty and impossibility of life in Gaza, and sifting through the rubble to find plastic and metal that he can re-sell for a few dollars a day.

The strength of the documentary is that, unlike other films focusing on life in the Gaza Strip, the West Bank, or of Palestinians in Israel, it is not compromised by self-censorship or a need to make the situation in Palestine look like “both sides” are “equally guilty.” Gaza Fights for Freedom unequivocally shows the huge disparity between a heavily-armed and unaccountable military backed by the most powerful empire in history, and a largely unarmed, brutalized, blockaded people.

In the film’s main section–the Great March of Return protest–this gap is clearly shown. Shocking and powerful to watch, viewers see unarmed marchers shot  down and grievously injured in the thousands by the Israeli Defense Force.

Sections of the film cover the systematic and deliberate execution of journalists, women, medics, the elderly, and disabled people, backed up with on-the-ground video reporting from the videographers working with The Empire Files. The film documents the  massive scale of the war crimes committed by the Israeli government, as marching, chanting, dancing groups of Palestinian people, young, old, often led by women, are suddenly broken up by shots from snipers. There is a horrible stillness as protesters fall to the ground. A journalist at the scene, told  the United Nations Commission of Inquiry on the 2018 protests, “I have covered wars in Syria, Yemen, Libya. I have never seen anything like this. The slow methodical shooting. It was just shocking.”

This is juxtaposed with footage from the corporate media in the United States, where talking heads in Israel and the U.S. characterized protesters in Gaza as a mob instrumentalized by Hamas to breach the border fence and commit a genocide in Israel.

The film’s most haunting part tells the story of Razan al-Najar, a young nurse and paramedic with the Palestinian Medical Relief Society. She was shot and killed on June 1, 2018, as she and her medical team walked towards the border fence bringing to safety a wounded protester shot just yards away. Extended footage from that day, and interviews with Razan’s family, co-workers, and friends, build a powerful example of the Israeli terror.

The film showing was followed by a long standing ovation from the packed theater.

In a question and answer session moderated by Melina Rodriguez of the ANSWER Coalition – Los Angeles,  Martin and Prysner discussed the making of the film. They explained that  Gaza Fights for Freedom was meant not just as a  documentary, but as  evidence to be used in a legal case against the Israeli governments in international human rights courts. Martin stressed how dependent Israel is on the United States, not just for military support but also for legitimizing its crimes. With support coming “directly from our tax dollars,” she called on Americans to fight for Palestinians from inside the empire. Asked if he believed any U.S. politician running for president in 2020 would stand up for Palestine, producer Mike Prysner said that, while some figures in the race have made gestures of support, “we can’t rely on any politicians to change things. The movement will come from ordinary people.”

Gaza Fights for Freedom is a powerful and hugely important film about the struggle of the Palestinian people to be free from occupation and brutalization. Viewed by  a large audience, it can help build the solidarity movement within the U.S. to fight for total freedom for all Palestinians, and to bring Israel and its U.S. backers to account for crimes against humanity. The trailer can be viewed here.