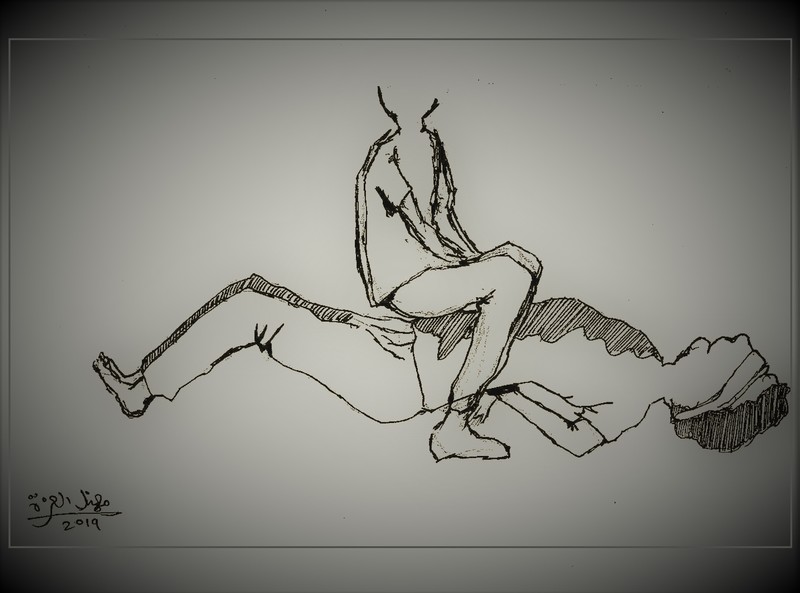 Sketch depicts one of several stress positions Israeli prison officers use against Palestinian detainees. (via Addameer)

Addameer had been collecting evidence on Israel’s use of torture and ill-treatment against Palestinian detainees since late August.

Prison officers were found to have ill-treated some 50 detainees, studied by the prisoners rights group, of whom about half were subjected to torture.

An Israeli court in Jerusalem issued a gag order on 10 September that barred Addameer and the general public from publishing information on cases of Palestinians being held at the Russian Compound, a notorious Israeli detention center in Jerusalem.

The court renewed the order twice after that, until it expired on 7 December.

“Since its creation, the occupying state developed and enforced laws and practices that led to both: the systematic use of torture and to absolute impunity for the perpetrator of this crime,” Addameer writes in a report that goes into some detail about the forms of torture Israeli prison officers employ.

These include beatings, sleep deprivation, stress positions, sexual harassment and others.

More than 70 Palestinians have died after torture in Israeli custody since 1967, according to Addameer’s research.

This number includes 23 prisoners who died after Israel ratified the United Nations convention against torture in October 1991.

Still, not a single individual or entity was ever held accountable.

Overall, some 220 Palestinians have died in Israeli custody since 1967.

Israeli officers “hit, slapped, punched, poked (using their fingers), and kicked the detainees,” in some cases causing them life-threatening injuries.

To make matters worse, officers sometimes blindfolded detainees “so they would not expect the beating or know where it is coming from,” according to the report.

Beatings would sometimes last dozens of hours and be done by more than five different officers at once.

The complicity of Israeli doctors in crimes of torture is not to be ignored, Addameer stressed.

In some cases, Israeli doctors faked medical assessments of detainees, qualifying them for further interrogation despite there being clear signs of torture on their bodies.

To maximize pain and pressure, Israeli officers would sometimes force detainees into stress positions before beating them.

Stress positions not only impose physical pain on detainees, but are means of applying psychological pressure as well.

In almost all stress positions, Addameer says, detainees are forced to maintain a position designed to make them lose balance, giving cause to Israeli officers to beat them.

One such position has the detainee’s legs cuffed to the legs of the chair and the hands to the other side, forcing their back to arch over the seat of the chair.

Interrogators can then either sit on or beat the detainee’s abdomen.

A sketch of the so-called “banana position” was published by Addameer on Twitter, along with other such positions:

Israeli officers went on to teach this method of torture to American occupation forces in Iraq torturing detainees at the Abu Ghraib prison. There, the stress position earned another name, “the Palestinian chair,” according to Eric Fair, a former American interrogator at the prison.

“They call it the Palestinian chair,” Fair wrote in his memoir “Consequence,” referring to two American army sergeants.

“They say the Israelis taught them how to build it during a joint training exercise. I assume it’s called the Palestinian chair because that’s who was forced to sit in it,” he wrote.

“They say everyone breaks in the chair.”

In his memoir, Fair describes the self-disgust he went on to live with having witnessed a detainee tortured in the Palestinian chair.

“Witnessing a man being tortured in the Palestinian chair requires the witness to either seek justice or cover his face. … I’ll spend the rest of my life covering my face,” he wrote.

“Having seen the Palestinian chair, it’s impossible to deny that it has all been wrong.”

Other shared tactics between Israeli and American interrogators and occupiers include sleep deprivation and a variety of psychological tortures including threats of rape.

Cooperation between the United States and Israel also extends to joint police trainings.

Israel’s domestic spy agency, the Shin Bet, practices torture “as standard operating procedure in a systematic and wide-scale approach against Palestinian detainees,” which Addameer affirms could amount to a crime against humanity.

While Israel’s high court supposedly outlawed torture in 1999, it ruled that the Shin Bet can use torture in supposedly “ticking time-bomb” circumstances to investigate Palestinian prisoners.

Israel’s “ticking time-bomb” loophole was cited by US foreign spy agency the CIA to justify its torture regime – a US Senate inquiry revealed in 2014 – another example of sinister cooperation between the two states on matters of torture.

Another shared consequence of American and Israeli crimes is impunity.

Since 2001, some 1,200 complaints against Israeli interrogators were filed, according to the Public Committee Against Torture in Israel.

Every single case was closed with zero indictments.

“This Israeli illegal occupation has violated all the legal elements of an occupation under international law,” the Addameer report concludes.

There are no domestic legal means to seek justice, it adds, as those complicit are part and partial of Israel’s legal system and government.

“In fact, the agencies complicit in those crimes include the intelligence agency, military court, military prosecution, Hight Court, and even the medical staff that were involved in providing medical care and assessment for those detainees subjected to torture and ill-treatment.”

As evidence of Israeli war crimes continues to mount, so should investigations and indictments by the International Criminal Court.