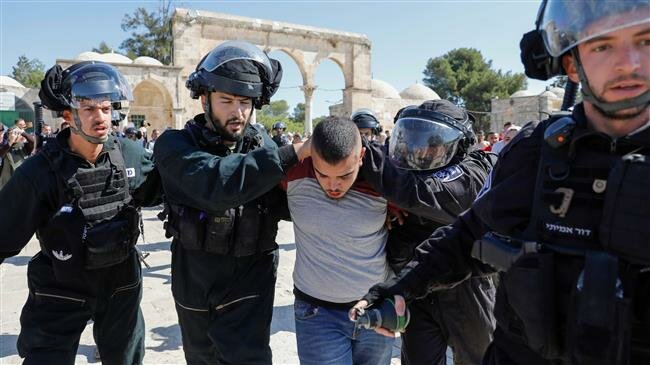 Thirty Palestinians in Israeli jails have joined a hunger strike in solidarity with six detainees who have themselves been refusing to eat or drink to protest their illegal detention without charge or trial.

The Popular Front for the Liberation of Palestine said on Monday that another group comprising 30 prisoners had joined the open-ended hunger strike to protest against the practice of so-called administrative detention.

The prisoners reject the intake of any food or water to step up pressure on the Israeli authorities to meet the demands of the six detainees who have been on hunger strike, particularly Huthaifa Halabiya, whose health condition is deteriorating.

The latest group brings to 49 the number of prisoners who have joined the protest action in solidarity with the six detainees.

Also on Monday, Israeli forces arrested a handicapped man in a raid on his home in Isawiya in the occupied Jerusalem al-Quds.

The man, Jarrah Mohmmed Ali Nasser, in his 40s, has been suffering from hemiplegia since birth.

It was unclear why he was arrested.

More than 7,000 Palestinians are reportedly held in Israeli jails. Hundreds of them have apparently been incarcerated under the practice of “administrative detention,” a policy under which Palestinian inmates are kept in Israeli detention centers without trial or charge.

Some Palestinian prisoners have been held in administrative detention for up to 11 years.

Over a dozen Palestinian lawmakers and nearly 20 journalists are also held in Israeli detention centers, several of them under the administrative detention policy.

In 2015, Israel approved a law that authorizes force-feeding the Palestinian prisoners on hunger strike, a practice rejected by the United Nations as a violation of human rights.