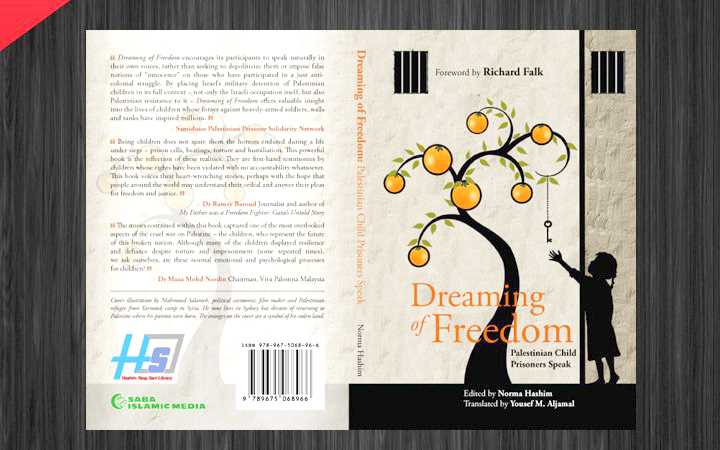 Israel continues to commit atrocities on the Palestinians since its creation in 1945.  It hardly shuns from occupying and building settlements on the Palestinian land, blockading Gaza, preventing and seizing medicine and food meant for the sick and starving.

It showers bombs and rockets on the Palestinian buildings. It seldom shows mercy in bulldozing houses while the inhabitants are still in them.

Above all, the worst of the atrocities committed by Israel is the imprisonment and arrest of the Palestinian children. The detention of children mostly mid-teenagers without trial, subjecting them to physical, emotional violence and solitary confinement rips off the heart and harrows the soul.

The book, “Dreaming of Freedom: Palestinian Child Prisoners” speak features the tale of 24 children who have undergone the detention and imprisonment in different prisons of Israel.

In fact, the author, Norma Hashim has incorporated the interviews of 24 children who have been detained and imprisoned by Israeli authorities on various occasions in the book. Those interviews were conducted in 2015 by Fayhaa Shalash.

The book contains a special section on the five Hares (a village in the West Bank of Palestine) boys who spent 15 years in a prison for a crime that according to the author never occurred.

Among the 24 children, there is a 12-year-old female detainee, Malak Al-Khatib, aged 14 as well. The book fore-worded by Richard Falk, begins with the narration of the victimization of a boy of 14 years at the hands of Israeli forces and ends with the sad tale of a boy of 16 years.

In total the suffering of 29 children of Palestine belonging to different villages of the country mostly within the Jerusalem is recorded. The facts or the first hand testimonies of Israeli aggression revealed by the children in the book are not only shocking but equally shameful.

The injuries and abuses inflicted upon such children is an act of revenge by the Israeli occupied forces, in response to the uprising of 1987, known as the “Uprising of Stones.”

Besides the ongoing, Al-Quds Intifada, in which the unfortunate children of the sacred land have taken part turns out as an eye-sore for the Israeli authorities.

According to the author, Israeli forces and detention centres violate all the articles of Geneva Convention (1949), especially Article 77 of the Additional Protocol 1 (1977) to the Geneva Convention that offers special protection to the children of Palestine.

The practice of apprehending the Palestinian youth in the middle of the night in the presence of the entire family including very young siblings, painfully tied and blindfolded, badly beaten while being taken to interrogation centres crosses all the limits of violence and barbarity.

Apart from beating, the children are intimidated and harassed through various means. According to a victim namely Tamer’ Ayyad Ahmad Sof, “They (Israeli forces) started singing loudly near my ears to harass me,” (p.162).

The helpless Palestinian children are strip searched and tied to the hard metal-chairs for interrogation that too without the presence of a lawyer.

A victim named Mohammad Jum’aa, aged 16 years narrates his ordeal as… “they took my clothes off. I was completely naked. Then they handcuffed my hands from the front. They also shackled my feet. They put me in the car and transferred me to Al Jalame interrogation and detention centre,” (p.141).

Not only such children are beaten physically, they are injured emotionally and psychologically as well. To exact the confession from them, they are reprimanded of torturing their family members. The dogs are unleashed and set so close to the child detainees that they almost faint of fear, (p.140).

The Israeli forces go to every extent; through the aid of snitches, they emotionally exploit the young detainees and exact confessions from them, (p.145).

The forces eat and drink in front of the child prisoners while keeping them hungry for hours together.

According to victim Baraa’Abushama (16): “I was fasting (in Ramadan) and was trying to avoid my feelings of thirst. When we talk about the Occupation, nothing is surprising. Soldiers were eating and drinking in front of us, increasing our suffering and trying to push us to surrender. But thanks to God, we were not affected much,” (p.62).

The soldiers apart, the Israeli settlers also add to the sufferings of the natives.

A boy named Yazan Al-Shrbati, 14, says: “Every minute under occupation at the mercy of the settlers in this Martyrs’ Street, we are subjected to thousands of violations including police dogs and settlers throwing stones and Molotov cocktails [Petrol-bombs)] at us. They scream at us and beat us. All of this disturbs the tranquillity of our lives from the day we came into this world,” (p.30).

Inside the narrow prison cells as solitary confinement, the child prisoners are inflicted with all sorts of torture.

Osama Soboh, aged 14, recounts his ordeal: “I was in a narrow cell with no window or regular light, apart from some light which flashed on and off in a disturbing manner. It was used as a form of punishment and psychological torture against me. I marked the mornings and evenings by the timing of food portions given to me. Although they knew I suffered from asthma, they kept the air-conditioning on the whole time,” (p.98).

The helpless Palestinian children are captured like preys anywhere ─ on the ways back from school, in the markets, in the streets, etc.

A boy of 17, Alaa’ Hinthawi recalls, “… I was arrested while taking part in a protest of solidarity with Palestinian hunger striker, Samer Issawi. It was a very tough experience for me, where I was subjected to all forms of humiliation, assault and deprivation… The protest was about to come to an end when I was captured by some Israeli soldiers whom I had thrown stones at. They chased me, but I couldn’t escape. I was like a deer hunted by wolves,” (p.88).

The Israeli soldiers are indiscriminate in detaining, imprisoning, and torturing Palestinian inhabitants. They display no clemency in arresting girls and women.

A girl named Malak Al-Khatib, aged 14, recollects her suffering as: “Although, I needed to be home [from school] for lunch with my family who were waiting for me…Suddenly I heard shouts, which terrified me…Although, I had committed no crime, they grabbed me, chaining my hands and blindfolding me. The soldiers picked me up like booty they had won after fighting a war,” (p.65).

In all, the 29 children and their likes detained have been subjected to rigorous imprisonment varying from a year to as far as 15 years in jail.

The Israeli prisons and detention centres like Almaskoubia Interrogation Centre, Hasharon Prison, Megiddo Prison, Ofik Prison, etc are always filled up, thanks to Shabak (Israeli Secret Service) with the young boys and girls of the Holy Land, thereby snatching their childhood rights.

The book “Dreaming of Freedom” by Norma Hashim must serve as a wake-up call for the international community to oppose the severest of the inhuman acts committed by the Zionists of Israel.

The book must also serve as an eye-opener for the largest democratic country like India, who excels in blinding the childhood of countless children of Kashmir.

Author is a research scholar, Religious Studies, University of Kashmir.