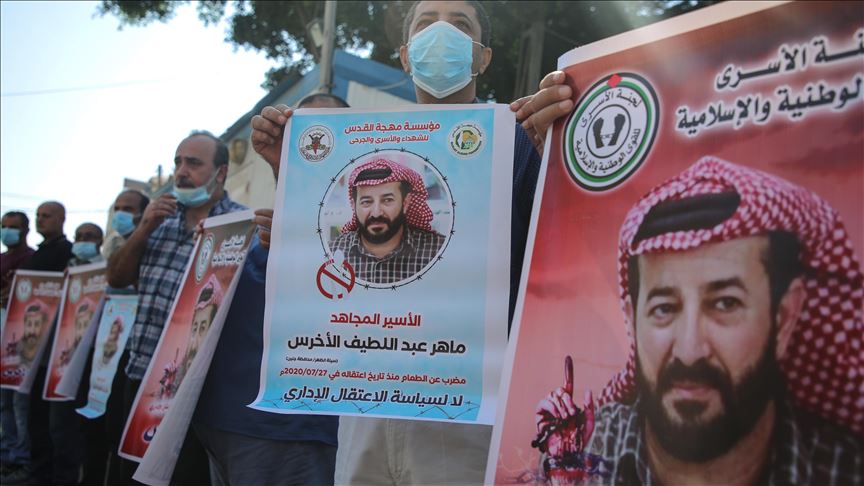 Protesters from Prisoners’ Committee of the National and Islamic Forces hold posters of Maher Al-Akhras, who has been on hunger strike for 73 consecutive days in Israeli jail, during a protest demanding release of Maher Al-Akhras in front of the United Nations High Commissioner for Human Rights office building in Gaza City, Gaza on October 07, 2020. ( Ali Jadallah – Anadolu Agency )

A Palestinian local committee in Gaza on Wednesday urged the international human rights groups to urgently put pressure on the Israeli authorities to save the life of Palestinian detainee Maher al-Akhras who has been on hunger strike for over 70 days.

“The life of detainee Maher al-Akhras is passing through difficult times and his health condition may deteriorate at any moment,” said Ibrahim Mansour, from the Democratic Front for the Liberation of Palestine, in a news conference in Gaza held in front of the office of the UN High Commissioner for Human Rights.

Mansour, who spoke on behalf of the Prisoners’ Committee formed by many Palestinian groups, called on the international human rights organizations to urgently exert pressure over the Israeli authorities to stop the policy of administrative detention against the Palestinian people.

He also held Israel responsible for the al-Akhras’ health.

Speaking to Anadolu Agency, the wife of the detainee, Taghreed al-Akhras, said: “After 73 days of his hunger strike, his health condition became very serious and requires special health care.”

She also complained of weak official and international reactions to her husband’s ordeal.

Maher al-Akhras was detained on July 27, and held by the Israeli authorities under the administrative detention, with no trial or charges, which pushed him to wage an open-ended hunger strike.

Under Israel’s “administrative detention” policy, prisoners can be held for up to one year without charge or trial.

Some 5,000 Palestinian political detainees are languishing in Israeli jails, including 43 women, 180 children, and 430 detainees under the administrative detention.

* Ahmed Asmar contributed to this report from Ankara.