RAMALLAH – Today, the Israeli military court at Ofer prison in Betunia, Ramallah, issued a verdict to reinstate the original sentence of Samer Issawi. Issawi, who became world famous due to his legendary record-breaking hunger strike during his previous arrest, was originally sentenced to 30 years imprisonment on the basis of his alleged resistance activities.

During the historic prisoner swap deal brokered by Egypt in 2011, Samer Issawi was released after having spent 10 years in prison, and his original sentence was revoked. He was then rearrested in July 2012 on false allegations of having violated the conditions of the deal, but waged a record-breaking 277-day hunger strike against his detention.

His courageous struggle and charismatic personality won the hearts of many around the world, and gave rise to widespread solidarity campaigns and protests. This put the Israeli occupation authorities under significant pressure, which resulted in a deal with the prison authorities, in which Samer Issawi negotiated his release. The announcement of this deal on April 22, 2013, was celebrated among solidarity activists as a victory against the occupation, and against the random imprisonment of Palestinians. However, in July 2014, Samer was rearrested. Solidarity movements had their hands full making sure that news from the savage Israeli attack on Gaza would reach the masses, despite a worldwide pro-Israeli clampdown of mainstream media, so it barely caught their attention.

While his health condition still left a lot to be desired for, there was no strong campaign for his release as in his previous detention. Samer’s main advocate, his sister the lawyer Shireen Issawi, who had relentlessly campaigned for the release of her brother, had already been imprisoned in March 2014, together with their other brother Medhat. While still in detention, Shireen received the Al Karama Human Rights Award in absentiam, for her brave stances in campaigning for Palestinian political prisoners. 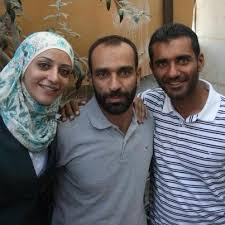 All three siblings, Samer, Shireen and Medhat are still in detention. The news of the reinstatement of Samer Issawi’s original 30-year prison sentence has come as a harsh blow for the Issawi family, continuously harassed and terrorized by the forces of the Israeli occupation for their brave resilience in the face of a brutal and illegal occupation.

The news of Issawi’s sentence is expected to evoke widespread condemnation, solidarity activism, and protest. As the news slowly reaches the masses, it is of vital importance that calls for the release of the hero Samer Issawi are reiterated, and that solid campaigns are initiated.