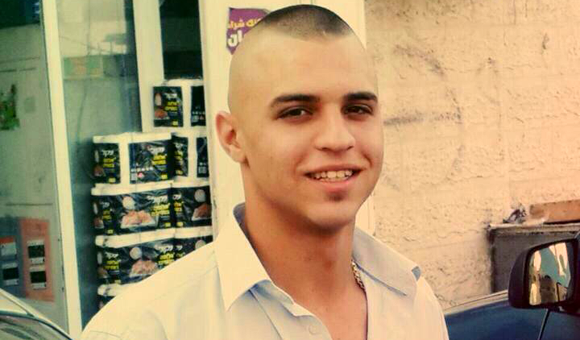 Israeli police informed Fadi Hasan Abassi, 17, on October 20 that Israel’s Defense Minister, Moshe Ya’alon, issued an administrative detention order against him for up to six months.

In the early hours of October 19, Israeli forces arrested Fadi Hasan Abassi, 17, and Mohammad Saleh Ghaith, 17, from their homes in the East Jerusalem neighborhood of Silwan. They transferred the teenagers to Oz police station in the East Talpiot settlement, also known as Armon HaNetziv, in East Jerusalem. Abassi and Ghaith told Defense for Children International – Palestine that interrogators accused them of throwing stones at Israeli police vehicles, which they both denied. They appeared before the Jerusalem Magistrate Court separately on different dates and the judge extended their detention.

Israeli forces also arrested Kathem Mahmoud Sbaih, 17, in a predawn October 16 raid on his home in the East Jerusalem neighborhood of Jabel Mukaber. His father, Mahmoud Sbaih, told DCIP that an Israeli court upheld the three-month administrative detention order against his son on Monday. Administrative detention is the imprisonment of individuals by the state for prolonged periods without charge or trial.

“We are deeply disturbed that Israeli authorities have approved the detention of these three boys without charge or trial,” said Ayed Abu Eqtaish, Accountability Program director at DCIP. “Administrative detention must never be used as a substitute for criminal prosecution where there is insufficient evidence to obtain a conviction.”

Israeli forces transferred both Abassi and Ghaith to Mascobiyya interrogation and detention center in Jerusalem. On October 25, the two teenagers appeared before the Jerusalem District Court to confirm their detention orders, however, the presiding judge postponed the ruling until October 28.

According to sworn testimonies collected by DCIP, Israeli interrogators did not properly inform the Abassi and Ghaith of their right to remain silent or allow them to consult a lawyer prior to interrogation. Neither of them had a parent or family member present during interrogation.

According to Addameer, a Palestinian prisoner rights group, at the end of September 2015, 343 Palestinians were held under administrative detention in Israeli prisons.

Tensions over access to the Al-Aqsa mosque in Jerusalem’s Old City escalated into lethal attacks across East Jerusalem and the rest of the occupied West Bank. The mosque lies in a compound known to Muslims as the Noble Sanctuary and to Jews as the Temple Mount. Both faiths consider the site sacred.

Since October, DCIP has confirmed that Israeli forces killed at least 12 Palestinian children in separate incidents across the West Bank, including East Jerusalem, and the Gaza Strip.

International juvenile justice standards, which Israel has obliged itself to implement by signing the UN Convention on the Rights of the Child in 1991, demand that children should never be deprived of their liberty arbitrarily and their detention must be a measure of last resort.